Lamborghini was not pleased with the performances offered by the Huracan.

It added more power and made it faster with the 2017 Huracan Performante (performance) series.

In March 2017, Lamborghini unveiled the Huracan Performante at the Geneva Motor Show. It was one of the special editions made by the Italian car-manufacturer for its vehicles. It was usual for brands such as Lamborghini, Ferrari, or Aston Martin to build special editions for already launched vehicles and sell them with more money, even if under the skin it was the same car. But the Performante was more than that.

At the front, the new design for the bumper. It had no grilles, emphasizing lightweight materials, efficiency and sportiness. The side-sills were bigger and were built from carbon-fiber. In the back, a clear cover for the engine compartment was enhanced with more air-scoops. The rear, massive, wing, was crafted from one piece, using the Forged Composite technology.

Inside, the air vents, paddles, door handles and the center console were made from Forged Composite. The driver was in touch with the active aerodynamics’ activities: not only through the car’s performance but from the special ALA graphic in the dashboard display.

The Huracan Performante was stiffer than the coupe version. It was fitted with magnetorheological adaptive dampers, for higher cornering speeds. The car was 40 kg (88 lbs) lighter than the standard Huracan, which lead to better 0 to 100 kph (0-62 mph) time. 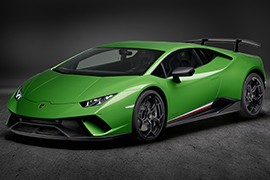