Launched to celebrate the centenary of Lamborghini founder Ferruccio, the Centenario hypercar was produced in only 20 copies, each having a starting price of 1.75 million euros plus taxes. That huge amount of money would have gotten you the fastest road-going Lamborghini in history, with a top speed of over 350 kph (217+ mph).
Largely based on the Aventador but with an all-new carbon fiber body and revamped V12 engine, the Lamborghini Centenario can go from naught to 100 kph (62 mph) in just 2.8 seconds and, even more impressively, from 0 to 300 kph (186 mph) in just 23.5 seconds. Still naturally aspirated, the 6.5-liter V12 develops no less than 770 horsepower at full chat. Since the monocoque and body shell are entirely in carbon fiber, the hypercar only weighs 1,520 kg, making for a power to weight ratio of 1.97 kg/hp.
As we are talking about a $1,900,000 car, the interior was highly customizable, buyers choosing their preferred piping, stitching, leather color and other materials in the cabin, as well as the exterior color. The Centenario was equipped with a standard 10.1-inch screen and offered touchscreen navigation, Apple Car Play and others.
A few months after the coupe’s launch, Lamborghini presented the Centenario Roadster at the Pebble Beach Concurc d’Elegance. The roadster was heavier and had a top speed of 350 kph. 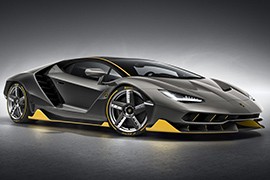