2 BMW Brings Out the Only E31 M8 Ever Created, You Can See It Too

A daring combination between Soviet-era design and modern German engineering, the Volga V12 Coupe is probably the coolest custom car that ever came out of Russia.

The Volga V12 Coupe Is a Stereotype-Defying, BMW M-Powered Custom From Mother Russia

Produced in three distinct series from 1956 to 1970, the original Volga (or GAZ M21) was the Soviet Union’s most iconic vehicle. Developed as an executive sedan for the communist state’s nomenklatura, its initial design drew inspiration from American models such as the Chevrolet Bel Air, Plymouth Savoy, or Ford Mainline, combined with rugged underpinnings that were constructed to cope with poor roads and tough weather.

The blend of comfort and toughness made it the most sought-after passenger car in the Soviet Union, but it was also exported to many other countries. One of them was communist Romania, where key figures of the party received Volgas. My grandfather, who was a driver for the party, got the rare opportunity to drive one daily, for more than a decade. As a kid fascinated by anything that came with wheels and an engine, I used to have lengthy conversations about cars with the old man, and he always brought up the Volga. Although far from perfect, it was easy to fix, it could conquer any dirt road, and the unparalleled amount of rustproofing ensured its bodywork never needed any repairs.

Like my grandfather, Russians have a special place in their hearts for this car. Even those who were born decades after the last M21 rolled off the assembly line are fascinated by it. After the fall of the Soviet Union, many of these cars were restored and modified, which gave birth to some wild, custom Volgas, but undoubtedly the most outrageous of them all is the unique V12 Coupe.

Its story starts in 2000 when the founders of A:Level, an up-and-coming tuning house located near Moscow, decided to transform an old, third-series Volga into the two-door, rear-wheel-drive grand tourer that it never was.

To do this, modifying the car’s original chassis was out of the question, so the small team of aspiring designers and engineers made the controversial decision to use a German sports car as the base for their project. The model in question was a BMW 850CSi, the M-developed version of the E31 8 Series which traced its origins to the mind-blowing 1991 M8 prototype.

Stripped of its standard body, the 850CSi’s chassis was slightly revamped, but it retained the active rear axle, upgraded braking system with floating calipers and big, ventilated discs, or hydraulic steering rack.

Also retained was the M-engineered S70B56 powerplant linked to a Getrag 560G six-speed manual. Displacing 5.6 liters, the naturally-aspirated, all-aluminum V12, gave the Volga no less than 375 hp and 406 lb-ft (55 Nm) of torque to play with – a 300-hp improvement over what its GAZ four-cylinder could deliver.

From the front, it looks like a 1960s M21, but its much-lower stance, chopped roofline, and the absence of rear doors made it clear that this beauty was no ordinary Volga. Wider and longer, the V12 Coupe only shares its headlights, turn signals, and taillights with its Soviet-era sibling. Many other parts such as the front grille, bumpers, hood, or windshield look the same, but in reality, everything had to be fabricated from scratch. The steel bodywork was entirely custom-built by a team of five people who had to hand-form each panel, since the company did not own a press at the time. Because of this, the body alone took almost a year to put together.

Inside, all traces of the original model were erased and the A:Level team managed to integrate the donor 850CSi’s hardware flawlessly. The dashboard, driver-oriented central console, and even the Bimmer’s Recaro seats were all kept and reupholstered with premium materials. The steering wheel was also fully covered in matching leather. At first, a conventional four-spoke version from the regular 8 Series was used, but later, it was swapped with one from an E46 3 Series.

The car was completed in 2001 and made its public debut several months later at the Moscow International Automobile Salon where it was the main attraction. The Russian public and automotive press were in awe of the reimagined Soviet-era icon, despite its German underpinnings.

According to A:Level representatives who talked to Car and Driver about this project in 2004, the owner who commissioned this incredible one-off had to pay around $500,000 for the privilege but judging by the result, it was well worth it. We wanted to reach out to the company for more details, but unfortunately, we couldn't find their website in the English-speaking part of the world-wide-web.

More than two decades after it was conceived, the BMW M-powered Volga V12 Coupe is still the most impressive custom car that came out of Russia, and maybe even one of the most audacious neo-classic customs of the last 30 years.

In the YouTube video below, you can watch the Coupe roam the streets of Moscow. It also features a detailed review, but be warned, it's all in Russian and there are no subtitles 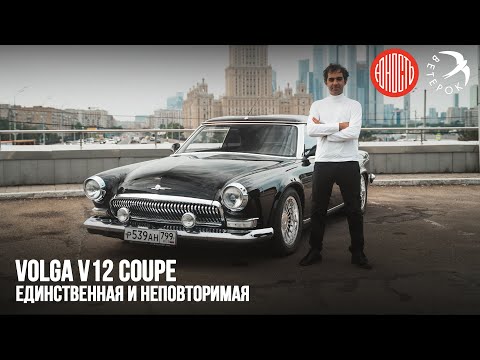