3 After Putting a V8 in a Tesla, Rich Benoit Wants to Give a Corvette Electric Motors

4 Bisimoto’s Porsche 935: The EV Conversion That Even Petrolheads Have Fallen For

5 This Alfasud Became an Electric Machine Thanks to Its Restoration Process
Car video reviews:
Up Next

Recently, a British startup called Charge unveiled the production version of a limited-edition EV that’s built around the timeless 1967 pony car. Although it looks stunning and the idea behind the project is admirable, the absurd price tag makes absolutely no sense.

The Iconic 1967 Mustang Will Make a Comeback in EV Guise, But It Has One Major Problem

Introduced in 1964, the Ford Mustang was a unique model that mixed sporty characteristics, practicality, and a beautiful, European-inspired design into an affordable package. This made it extremely popular right from the start, giving birth to the pony car segment that redefined the American automotive industry in the following decade.

Today, out of all the first-generation variants, the 1967 fastback is arguably the most revered. It was made famous by Steeve McQueen in the 1968 blockbuster Bullitt, where it took part in one of the most spectacular big-screen car chases of all time, as well as the 2000 remake of Gone in 60 Seconds, where a beautifully customized 1967 Shelby GT500 was used.

While Ford was working on a completely new electrified crossover that would don the Mustang nameplate, Shagaleev embarked on a mission to revive the original pony car as an exclusive, modernized EV. To turn this ambitious goal into reality, he founded a startup called Charge Cars and teamed up with EV drivetrain developers Arrival. The project was revealed to the public in November 2018, but a fully functional production version was shown earlier this month, after nearly three and a half years of hard work.

Heavily inspired by the Eleanor ‘Stang, the Charge-badged EV comes with a four-motor, all-wheel-drive setup instead of the original gas-guzzling V8. Arrival’s drivetrain gives the car 400 kW of peak power, which translates to around 536 bhp and a mid-bending 1,106 lb-ft (1,500 Nm) of torque which propels the Mustang from 0 to 60 mph (97 kph) in 3.9 seconds. Those are some serious figures when compared to what an original ’67 could achieve, but not all that spectacular if we consider what modern EVs like the Tesla Model S Plaid can do.

The same can be said about the 64 kWh battery pack. According to Charge, the electrified pony car can go about 200 miles (321 km) on a single charge – a mediocre range, to say the least. Moreover, it supports charging speeds of up to 50 kW, which is six times slower than what a Porsche Taycan, Audi e-tron GT, Hyundai Ioniq 5, or Kia EV6 can support.

Those details aside, the startup spent years refining the maneuverability to modern sports car standards. The e-Mustang comes with a fine-tuned independent suspension and modern brakes which should make for a much better driving experience than what the original 1968 model could deliver.

The company also revamped the interior which oozes luxury from every square inch. Yes, the 2+2 seating that contributed to the Mustang’s rise to best-seller status is gone to make room for the electric hardware, but the driver and lone passenger are treated to premium, hand-stitched leather, a digital gauge cluster, and a tablet-like infotainment screen with a fully customizable interface. Speaking of which, all 499 Charge ‘Stangs will be fully customizable to each individual owner’s desires, but the extent of the customization options has not yet been revealed.

So, if you love both classic Mustangs and modern EVs, this limited-edition, hand-built electric Mustang becomes very appealing. It might not be a showcase of the latest technologies available on the market, yet it delivers plenty of power and adequate range in an absolutely gorgeous package.

The problem is that the price for this neo-classic pony starts at £350,000, or about $456,000. Yes, you read that right. A mediocre EV drivetrain fitted with a luxury interior and topped off with a replica Mustang body somehow costs more than a brand-new Ferrari.

To put into perspective just how insane this price tag is, $456,000 can get you three Model S Plaid Teslas and you’ll still have about $70,000 to buy a fully restored 1967 fastback. If you really want a bespoke electric Mustang, you can use that money to get Chip Foose to design one for you and I bet you’ll still be able to spare some change.

It turns out that Charge sources the body shell from an American company called R3 Performance Products. On their website, you’ll find a fastback shell available for $24,999. Fitting an electric powertrain that provides similar performance figures, adding a lavish interior and all the modern components that you can imagine cannot exceed $100,000. Moreover, many custom shops all around the world are more than capable of taking on such a project for less than $50,000.

To conclude, the Charge Mustang is a wonderful take on electrifying an icon, but its price defies common sense. That being said, we cannot condemn the British startup for trying to speculate on a growing trend. There are countless companies out there who convert classic cars into modern EVs and sell them for eye-watering figures. The real problem lies with the people who buy these vehicles, ignoring the fact that they are grossly overpriced. Years from now, when most EVs will cover over 600 miles (965) on a single charge, limited-edition conversions such as the Charge Mustang will have no resale or collectible value, since they are just glorified kit cars. 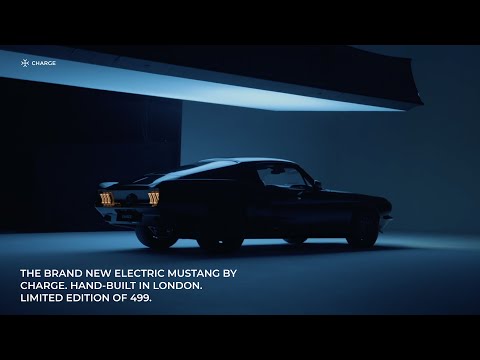