1 Opulence Is the Volkner Mobil Performance S, the Ultimate Motorhome

2 Standard is Boring, This Luxury Home on Wheels Has Two Bathrooms and TVs Everywhere

4 The Boaterhome Is Half Boat, Half Truck and All RV: Perfect for Family Vacations

5 Force HD’s Interior Is So Luxurious and Comfortable, You Won’t Want to Step Outside
Car video reviews:
Coverstory

Assuming you have money to burn, why would you not want to take your entire home with you – and the garage! – when you go on vacation? With this particular motorhome, life on the road gets an entirely different meaning.

The Futuria Sports + Spa Motorhome Comes With Garage and Jacuzzi, Your Own Nightclub

This August, we’re looking at some of the most interesting, iconic, fabulous, creative and downright weird vacation vehicles, as we’re celebrating Travel Month. For this particular vehicle, we’re going back in time to 2010, when German company Most Mobile Specials (MMS) introduced its first truck ever: the Futuria.

MMS specialize in custom articulated lorries, mostly for promotional purposes like rolling billboards or motorized shops and venues. In 2010, it announced its first line of trucks, called Futuria, which now comprises several models of varied sizes and functionality. But it’s one particular model we’re interested in, because it was the first and remains the most outrageous of the bunch: the Sports + Spa motorhome.

Announced that same year and brought on display at the Caravan Salon in Düsseldorf, Sports + Spa was initially meant as a concept only, to showcase what was possible in terms of customization with a Futuria truck. The company later announced that only 20 such motorhomes would ever be produced, and that the Futuria line would comprise 100 altogether. That is to say, this was an exclusive product. And it would be priced to match.

Technically, Sports + Spa isn’t as much a motorhome as it’s a condo on wheels by the track. It comes with its own garage for your sportscar and a generous sundeck that includes a jacuzzi, a massive lounge for entertaining and just the tiniest bunk in lieu of the luxurious sleeping accommodations you’d get on similar motorhomes. If your ideal vacation includes extended periods at the track, you can park it close by and have some fun: racing by day and partying by night.

One of the highlights of the Sports + Spa motorhome is the garage, accessible through the rear by means of a 3.8-meter (12.4-foot) ramp. It’s perfect for a sportscar and it comes with a side flap that allows you to get out of the car more easily, once the vehicle is loaded. It also does wonders for display purposes, if you’re ever in the mood to show off.

The second highlight is, as the name implies, the jacuzzi on the deck. Upstairs, the motorhome has a sundeck with steel railings (that fold down when not in use) and real teal deck like a superyacht. At the end of the deck is a 550-liter (132-gallon) basin with illuminated jet nozzles and pulsators, LED lighting and a special waterfall feature. The deck can be used for tanning or turned into an outdoor dining area for barbecues and informal meals. MMS notes that you shouldn’t compromise on your guest list: if you can’t fit everybody up top, there’s also an awning that expands the dining area on the ground.

Inside the motorhome, you get a small bunk with two one-person beds over the garage. In promotional videos, this bedroom comes across as a very tiny, cramped space where you wouldn’t want to spend time if you’re not sleeping, but at least it also seems comfortable enough. The rest of the space is taken up by a massive lounge with a U-shaped leather couch, big enough to seat 10 people, and a kitchenette. MMS never mentioned a bathroom, but we’re assuming there must be one at least with a toilet, if not a proper shower.

The entertaining lounge has starry roof and under-floor lighting, state-of-the-art sound system, a couple of screens, a smoke machine, and is soundproof. Your very own nightclub, if you will. The kitchenette is also for entertaining, but can still serve to throw together a decent meal: it has a coffee machine, a burner and oven, industrial-grade dishwasher, and fridge-freezer combo.

Sports + Spa is meant to be self-sufficient, so it has its own water (fresh and gray) tanks, powerful generator, surveillance and monitoring systems, and can be fitted with solar panels and batteries. With no budgetary restrictions, there’s nothing stopping you from taking this out on the road and staying there off-grid for longer stretches. A third bed is found in the cabin of the truck, because most also think of your driver.

The Futuria Sports + Spa is priced at €657,000 ($767,000 at the current exchange rate) for the most basic model, but since this is a custom rig, the only upper limit is the one you set, depending on what you want on it. 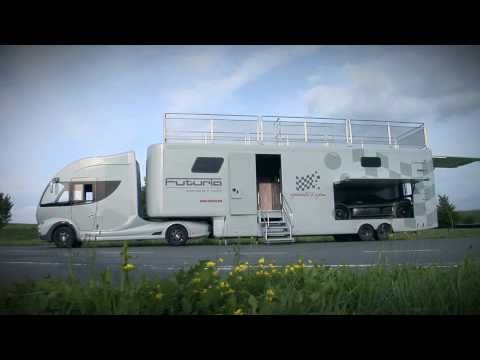 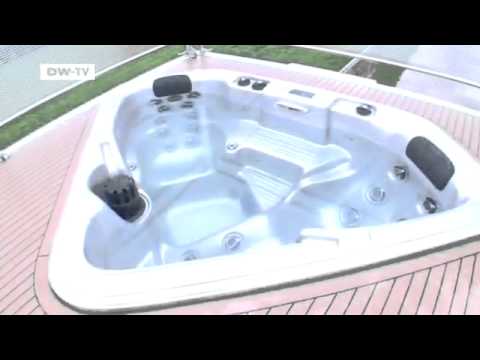