3 Man Thinks He Has a Heart Attack, Steals Ambulance to Go to the Hospital

5 This Classic Chevy Is an Ambulance You Won’t Mind Seeing During These Crazy Days
Car video reviews:
Up Next

A retired ambulance might be more valuable than you'd thought, especially if it is converted into a capable RV that can serve as a home away from home. Heck! It might be your only home on wheels!

Scott, the Campulance guy, is not your average neighbor who is skilled in all kinds of home improvement. He had already passed that level and had the idea to convert an ambulance into a capable RV ready to take him and his SO wherever they wanted to go. While this Campulance (yes, that's how he named the vehicle) might not be the most luxurious Thor or Winnebago, it offers the comfort of a home.

One of the biggest challenges was to find an excellent ambulance to be converted. Scott found this 1996 Ford E350 fitted with the mighty 7.3-liter V8 turbo-diesel powerplant. Unlike other ambulances that have to zip through traffic, this one was used as a transport vehicle from Davenport to Spokane (WA), which was about 100 miles (160 km) round-trip. Moreover, it was kept in an environmentally controlled garage and driven into the desert climate of eastern WA, meaning there aren't perceptible rust areas. On top of that, it didn't have too many miles on the odo.

Finding and buying the former ambulance was just a tiny step. The modification, on the other hand, took way more skill, sweat, and tears, but the result it's incredible. Unlike many other conversions available on the market, Scott also thought about the engine's power. He added an Edge Evolution CS tuner/Scan tool that can be programmed for various driving modes (fuel efficiency, power, balanced, etc.). In the stock version, that 7.3-liter Powerstroke Ford engine offered 210 hp (212 PS) and 435 lb-f (576 Nm) of torque, while with the new upgrade, on the most powerful setting, gains an additional 110 hp (111 PS) and 201 lb-f (285 Nm).

The Campulance (Camper-Ambulance) features two captain chairs for the driver and the passenger that can swivel 180 degrees. Scott added a Bluetooth-compatible JVC head unit on the center stack that is amplified to a six-speaker system, including a pair of marine-grade ones outside, at the back. But if that doesn't convince you about what he did to this retired ambulance, the "home" area might do it.

At the front, there is a freezer/fridge combo on the left. Above it, there are two storage compartments, and underneath, an additional tray that can be filled from outside of the vehicle.

The galley is fitted with a two-burner LPG stove fed by 15 gallons (15.7 liters) of propane. Scott installed LED light strips and cut a wide window to bring more light into the cooking area.

On the other side, facing the cooking area, some might believe there is just a cabinet and an empty space with a decorating panel. However, that panel actually hides a 43" 4K Sony flat-screen TV. It is mounted on a 26" pull-out arm that can swivel the screen by 180 degrees so you can watch it either from the inside or the outside of the cabin.

Next, towards the rear double-door, the Campulance features a couch/bed on the right side, which also serves as a dining area. While extending it is not that easy, it provides a real bed-like experience. Usually, regular folding beds are crossed by beams that can be felt through the mattress. Not on this one, since it is based on separate planks where you need to mount the legs that will support the entire structure. It took Scott seven minutes to make the bed. But it's a California King size bed!

If you think that's all, guess again! At the back, above the former ambulance double-door, there is a regular shower holder, and the shower curtain is supported by a crossbar held between the opened doors.

Don't worry about mosquitoes since Scott also thought about that and added a zip-open screen that can be attached to the entrance. Apart from the front doors, all the other entrances and windows are fitted with screens, so you can sleep in peace.

Outside, an additional tent can be placed in a matter of minutes. Maybe it's not the easiest pop-out tent on the market, but it's effective. It can be used as an external kitchen as well. Moreover, a rooftop tent is also included if you have guests or you just want to sleep under the stars. Only to explain what he did to the former ambulance, he prepared a few videos, including the one below.

Speaking of money, Scott is ready to part with his Campulance for $49,900. He might have another project in his mind, but he didn't say anything about that. We only know that if you want to see this RV, you should pack and go to Missoula, Montana.

If you think the price is too high for a home-built RV, think that only the engine is worth more than 10k freedom bucks. He advertised this RV on eBay, which might be a better deal than you think. After all, it's a complete house on wheels that can take you anywhere you want. And surely, you won't get unnoticed. 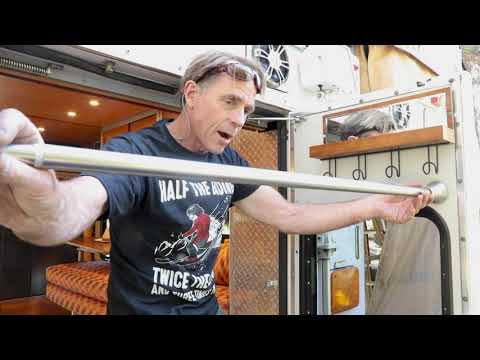