Do not adjust your monitors, that is indeed the Suzuki Jimny, not a Mercedes G-Class. The transformation was previewed at the end of December, but we're more than happy with the real deal, which was presented this week at the Osaka Auto Messe 2019.
15 photos

The little Jimny has become THE car to play with for Japanese tuners, and the European ones are getting in on the action as well. The baby Jeep looks so cool that we bet American car nuts are a little envious right now.

Wald International is a reputable name in the tuning world with massive success in the Rolls-Royce scene, not to Mention BMW and Mercedes. But they couldn't miss out on the vast opportunity that is the Jimny. The waiting lists for buying one of these are huge, so they're going to sell tens or hundreds more kits than for the Ghost or Wraith.

But let's examine what's going. A lot of the magic happens at the front of the car. They've completely changed the front bumper and created new headlights as well, with halo and projector designs that are inspired by the new G-Class.

The hood is overkill since it features two layers of fake bodywork, but the add-on square indicators are pleasing, even though they're just as pointless as the air scoops. The bumper has that G63 look but also borrows something from the Ener-G-Force concept. Who remembers that?

For a real off-roader look, Wald opted to install a set of rugged Toyo tires, new wheels and a jacked up suspension. You can't miss the bolt-on fender flares and the side exhaust, which seems decorative. Wald offers a cool spare wheel cover, accessory lights, and even a roof wing. Check out the video, photo gallery and tell us what you think. We can only presume interior mods are on the way? 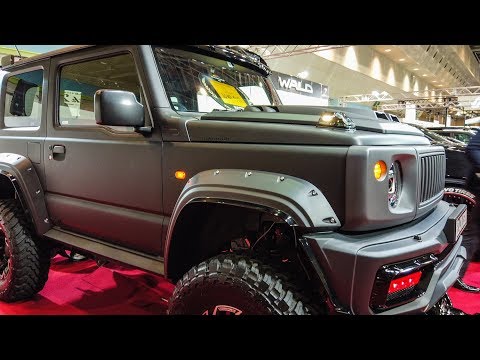