Suzuki introduced the third generation of the Swift in 2010.

The Swift was initially introduced in specific markets in 1983, and it was marketed in several markets with different names and brands, including the Geo Metro in the U.S. In 2004, Suzuki made a bold move and introduced a new global model, which it claimed was the first generation. But it was just a marketing strategy, and that's why on some markets, the MKI Swift appeared only from 2004 on. The 2014 Swift was a refreshed version of the global second Suzuki supermini vehicle, and it was offered as a three or a five-door hatchback.

There were some minor restyling changes on the outside, including an L-shaped daytime running lights in the front bumper. The three-door version featured a more pronounced ascending beltline toward the C-pillar. The B-pillar was blacked out, so it created the illusion of a wrap-around window area. The carmaker installed new taillights in the rear with the same shape and size as its previous version.

Inside, the three-door Swift featured a new audio system with Bluetooth connectivity and a sat-nav system available on the options list. Like its non-facelifted version, the 2014 model featured bucket-seats at the front installed up from the floor to make room for rear passengers.

Suzuki improved the technical side with the introduction of the AWD version for the 3-door hatchback. Another improvement was the new 1.3-liter DDiS unit, which got a slightly better fuel-efficiency. All engines were paired to a five-speed manual. The top of the range model remained the 1.6-liter Swift Sport version. 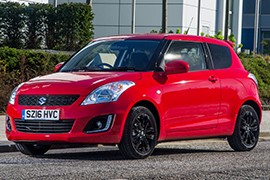