3 Mitsubishi’s 4G63T: The Iconic Four-Cylinder at the Heart of Nine Evo Generations

5 A Comprehensive Look at the Legendary Toyota 2JZ Engine
Coverstory

Born in the late-1980s, the EJ was a flat-four that powered the vast majority of the Japanese carmaker’s vehicles for more than three decades. The most capable versions were fitted under the hoods of the WRX-badged Imprezas, the legendary road and rally cars that helped transform Subaru into a global brand.

Subaru EJ: The Four-Cylinder Boxer That Punched Above Its Weight and Became Legendary

Developed from scratch during the second part of the 1980s as a replacement for the EA flat-fours, which had been produced since 1966, the EJ hit the streets in 1989 when the first-generation Legacy was introduced. At first, the engine codenamed EJ20 displaced 2.0 liters and was available in three distinct versions: a 123-hp single overhead cam, 148-hp dual overhead cam, and a turbocharged dual cam that could produce up to 217 hp.

In the years that followed, the powerplant was offered in various displacements with or without turbochargers and became the heart of all Subaru models. It was built around an aluminum block with cast-iron cylinder liners, five main bearings, and a forged steel crankshaft with different stroke lengths - depending on the displacement. The connecting rods in almost all variants were forged, while the pistons were cast (naturally aspirated units), forged, or hypereutectic (turbocharged units).

Compared to its obsolete predecessor that utilized two valves per cylinder, the aluminum heads of the completely redesigned EJ came with four valves in either the aforementioned SOHC or DOHC configurations. From 1999, some 2.0- and 2.5-liter versions were equipped with Subaru’s active valve control system (AVCS), which improved performance and fuel economy. Initially, the system only controlled the intake cam but starting with 2008, a dual AVCS was rolled out.

With a solid architecture, the versatile EJ became much more than just a well-built boxer thanks to the Japanese manufacturer’s motorsport endeavors. To homologate the new Impreza chassis for the World Rally Championship (WRC) In 1992, the company released a rabid version in late-1992. Dubbed WRX (World Rally eXperimental), it came with a turbocharged EJ20G rated at 236-hp. Combined with the beefed-up suspension and the symmetrical all-wheel-drive system, this engine made the WRX a thrill machine.

In 1994, an even more impressive WRX was born. Doing the carmaker’s motorsport division badges, STi (Subaru Tecnica International), it was as close as you could get to driving a rally car on public roads. With production limited to only 100 units per month in 1994, the turbocharged 2.0-liter at the heart of the STi received special fine-tuning that boosted its output close to 250 hp.

The EJ-powered rally cars became extremely successful during the mid-1990s, cementing the legendary status of both the Impreza WRX platform and its capable boxer. They helped bring Subaru three consecutive WRC constructors' titles (1995–1997) as well as a driver's championship for Colin McRae (1995), Richard Burns (2001), and Petter Solberg (2003).

The other high-performance EJ -the turbocharged 2.0-liter - continued to be offered in many markets, including Japan where it was produced until 2019. It rode off into the sunset under the hood of the WRX STI EJ20 Final Edition with 325 hp on tap and the title of the most powerful EJ20 of them all.

However, thanks to its solid architecture, the flat-four was always capable of more than what it could deliver in factory guise. The tuning community recognized its potential and began modifying it, which led to an increase of power well over the 600 hp mark. That being said, the EJ was never as easy to mod as other legendary Japanese engines, so it isn’t a popular choice for insane builds. Those who choose to tune an EJ are usually die-hard Subaru fans or owners of vintage rides with four-cylinder boxers that are looking for a cheaper, more powerful motor for cars like the first-generation Volkswagen Beetle or early Porsches.

There’s also a third category of people who use EJs for their custom projects, but these aren’t made for the road. Because of the low and wide profile, as well as their availability and price, they are a popular choice in light aircraft.

Produced for more than 30 years, this formidable engine proved that Porsche wasn’t the only carmaker that could develop a legendary boxer. It helped Subaru become a force in the WRC and powered four generations of the epic Impreza-derived WRX, one of the coolest homologation specials of the 21st century.

For those of you who want to learn more about the high-performance EJ20 and EJ25, we recommend watching the video below posted on YouTube by driving 4 answers. 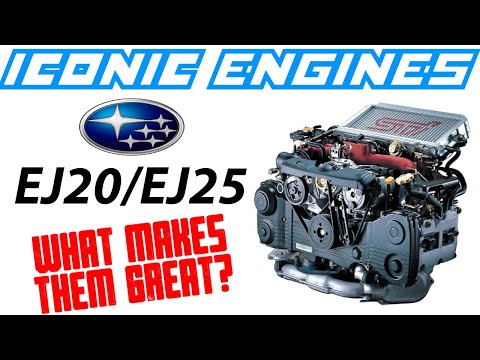