1 The Evolution of Alfa Romeo’s Bialbero, One of the Best 4-Cylinders of All Time

Throughout its 105-year history, the Bavarian carmaker has built many legendary high-performance engines. While the vast majority of them featured at least six cylinders, there were some notable exceptions, such as the naturally aspirated S14 which happens to be one of the greatest four-cylinders ever built.

It all starts back in the 1980s, a decade when BMW was heavily involved in various forms of motorsport. In 1984, a new touring car racing series called Deutsche Tourenwagen Meisterschaft (DTM) debuted in Germany, and the Bavarians clinched both the drivers’ and constructors’ titles at the end of the season, thanks to Volker Strycek who drove a 635 CSI. BMW managed to retain the constructors' title in 1985 and 1986 when they switched to the smaller and lighter E30 3 Series, but they weren’t as dominant, allowing Volvo (Per Stureson), then Rover (Kurt Thiim), to snatch the drivers’ trophy.

DTM regulations required all competing cars to be slightly modified, production models, and although the motorsport division’s engineers worked wonders on the plebeian 3 Series, the model which was never designed for the track reached its limitations.

However, behind closed doors, BMW M was working on an E30-based homologation special ever since 1984. Based on a standard chassis with motorsport-derived suspension and brakes, it featured a series of aerodynamic improvements including a new front splitter, rear apron, sill panels, C-pillars, trunk lid, and rear spoiler. But the biggest improvement of them all was the new engine.

Created by Paul Roche, one of the best engineers that ever lived and the mastermind behind BMW’s greatest powerplants, the new motor dubbed S14 was a lethal combination of components from previous designs.

The main goal was to make the car as light as possible, so instead of using one of the company’s successful six-cylinders as the base for the new design, Roche decided to build a straight-four.

The block came from the M10, BMW’s first modern four-cylinder. Although designed in the late 1950s, the cast-iron block was so good that it was used as the base for the most powerful Formula 1 engine of all time, the turbocharged M12 which was capable of close to 1,500 hp with maximum boost.

For the cylinder head, Roche took the aluminum unit with a dual overhead camshaft (DOHC) design from the M88, another legendary mill, that he initially designed for the spectacular M1 mid-engine sportscar.

Those of you who are familiar with the model are probably frowning while reading this because the M88 was a straight-six. To solve the problem, legend has it that the engineering team chopped off two combustion chambers from the original head, welded a metal plate at the end, and managed to fit it on top of the M10 block without other modifications. In the end, the head was rebuilt, preserving every little detail from the original design of the M88, including the 93.4 mm (3.68 in) bore and 84 mm (3.31 in) stroke.

For the internals, Roche used beefy cast pistons and conrods that connected to a forged, fully counterweighed crankshaft. The compression ratio was high for a normally aspirated engine built in the 1980s. It stood at 10.8:1 in the initial 2.3-liter version, and grew all the way up to 11:1 in the larger-displacement iterations that followed.

In all versions of the S14, the cam gears were driven by dual-row timing chains that were extremely sturdy, but throughout the engine’s lifespan, BMW used different chain tensioners, some of which were prone to premature wear.

Like the M88, this powerplant came with individual throttle bodies which not only improved performance but made the car sound less like a 3 Series and more like an M1, especially when revved close to its 7,250-rpm redline.

Powered by a 197-hp S14 that was linked to a Getrag 265 five-speed manual, the BMW M3 was unveiled to the public at Frankfurt Motor Show in 1985, with production kicking off several months later. It exceeded all expectations in terms of sales, and gave birth to one of the most famous high-performance sports car nameplates of all time.

To make sure that the car remained competitive following year-to-year homologation rule changes, BMW M continually improved it. This resulted in lighter and more powerful street-legal variants such as the Evolution and Sport Evolution models. Among the list of improvements, these special editions came with beefed-up engines that featured more aggressive cams or larger throttle bodies that helped increase output well over 200 hp.

The biggest and most powerful S14 ever built was found under the hood of the Sport Evolution (known as Evo 3) produced in just 600 units. The engine’s displacement was enlarged to 2.5 liters by increasing the bore and stroke to 95 x 87 mm (3.74 x 3.42 in). It could produce 235 hp in road-legal guise and 374 hp in race configuration.

These revamped homologation models solidified the M3’s position as one of the most dominant cars in the history of motorsport. It continued racking up titles in various touring car championships all over the globe, and even established itself in endurance racing, winning the 24 Hours of Nürburgring five times, between 1989 and 1994.

Today, the E30 M3 race car remains the most successful touring car of all time. while its street-legal counterpart is the most sought-after, M-badged BMW ever built.

If you want to know more about this legendary engine, I highly recommend watching the video below posted on YouTube by driving 4 answers. 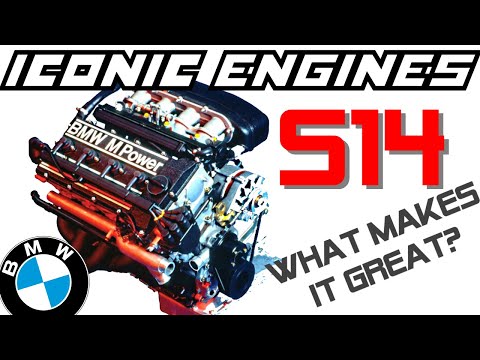