2 Back From the Dead and Up on the Stage, This 500 HP DeLorean Is Up for Grabs

Home > News > Car Profile
29 Dec 2021, 18:33 UTC ·
by Stephen Rivers
The Lamborghini Huracan is a fun and fast supercar. Among its competition, it might even be considered somewhat practical. Matt Farah of TheSmokingTire just drove the new Huracan STO in the canyons of California and says that it doesn't share that same practicality.
7 photos

After a week of driving the Mercedes-AMG GT Black Series, Matt was ready to switch things up. Of course, slipping into the Huracan STO is sort of like getting out of the frying pan and going into the fire. No, the STO isn't as punishing or as loud as the AMG, but it's just as serious.

It's that attitude that Farah praises for the most part. The drivetrain deserves every accolade it gets from what he says. It's smooth, delivers great power, and doesn't have any weak spots. The brakes are equally impressive. Matt highlights the unique heat management system Lamborghini uses. It's so good that the Huracan can do multiple hot lap sessions without needing a break.

Then there's the tire setup on this car. Unlike the Huracan STO that Farah recently drove at Willow Springs, this car has street tires on it. We see him do two launches in the video. During the first, the tires are cold and subsequently spin all the way into third gear. About 10 minutes later, after some spirited driving, he does the second. The wheelspin is all gone, and the Hurcan simply rockets away.

Of course, it's not all roses and hearts for Farah and the STO. He mentions some potential pain points. First, there's no storage. Literally no trunk, no area behind the seats, nothing. Then, there's the seating, which, for him, is a bit too tough and tight. Finally, the real concern for long trips. The steering.

It's not that the steering isn't great. It's that, according to Matt, it's too sharp. On long trips, drivers would need to be so precise and thoughtful so much of the time that it could wear one down pretty quickly. On a racetrack, that's great, but in the real world, it's another story. 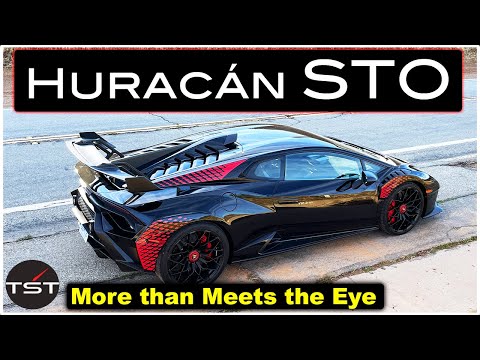