3 Video: Watch the New BMW M4 CSL Lap the Nurburgring Quicker Than Any Other Bimmer

A few days ago I met up with a former work colleague. I had just parked my Suzuki SV650S outside his office and that sparked a little discussion. While I was excited about riding for about 310 miles (500 km) within the past few weeks, I came to learn that he has been riding motorcycles for almost half a million miles now. I felt the same way when I saw Paul Löhmer going out for yet another fast lap on the Nordschleife a few weeks ago.

If the name doesn't ring a bell, allow me to freshen your memory. Back in October of last year, we ran a story about Paul and his Green Hell antics. The 23-year-old rider from Cologne had just taken his 2005 Suzuki GSXR-1000 to the Green Hell, where he managed to go from bridge to gantry in 7 minutes and 20 seconds.

Yes, that's right: 440 seconds for a BTG lap on a bike that's almost two decades old. Anyone who has ever ridden a motorcycle will appreciate the skill and courage it takes to achieve such a performance under the given circumstances.

In case you're unfamiliar with the details of a BTG lap, we're talking about a stretch of tarmac measuring in at 11.9 miles (19.15 km). This is not a track for the faint-hearted, with more than 1,000 feet of elevation change from the lowest to its highest point.

You can easily go up to 186 mph (300 kph) or more, if you've got what it takes, both from a mechanical and mental perspective. You have to account for weather and of course temperature variations, other cars and motorcycles, and a series of other potential hazards.

But Paul is no "SQUID" (Stupidly Quick, Underdressed, and Imminently Dead) as the motorcycle slang goes. He might not be a licensed pro rider, but watching him go around the track will surely make you think otherwise.

The last time we spoke to him before his current feat, he was already at around 300 laps on this track. Just 10% of those were done on a motorcycle, but he still knows the layout by heart at this point. His GSX-R lap was just 10 seconds shy of what seems to be the current record: 7 minutes and 10 seconds as set by Andy Carlile on a Yamaha R1.

By all accounts, it seems that Paul is now the second-fastest biker to ever run the Bridge to Gantry lap. And if you've ever met someone with a passion for racing, you'll know that settling for second best is not an option.

But we might have another story for you on that later on this year, as his GSX-R1000 has lost a bit of weight during the off-season. As Paul works at a Triumph dealership, he managed to get his hands on a new Street Triple 1200 RR test bike.

"The ultimate sport bike for the road" as Triumph calls it, has only been around for less than a year. And Paul has only ridden it for about 807 miles (1,300 km) so far. But he made it a point that he felt right at home after about 6 miles (9.65 km) of riding, which means this is more user-friendly than we initially thought.

As we haven't had the chance to review this model yet, we asked him to give us a brief description of Triumph's sportiest bike on offer: "The RR is not just one of the best looking bikes for me, it also rides exactly like that. The Brembos are so aggressive, the engine is just pure power at any given rpm and the fully electronic Öhlins suspension is simply brilliant".

So he did the natural thing and took the Speed Triple 1200 RR to the track. After about seven laps, he decided to step things up a notch. That's how this video came to be. He only needed 7 minutes and 23 seconds to go from Bridge to Gantry, on a completely stock motorcycle.

He could have shaved an extra four or five seconds if he didn't have to deal with slower drivers on the track. He admitted that there are several scary things to account for when going out for a fast lap, but having a good amount of respect for the Green Hell is a good way of ensuring that you'll get home safely.

We asked him about the most exciting moments of this fast lap, and he mentioned going flat out at Fuchsröhre and the little slide at Bergwerk which even made him scream inside his helmet - you can hear it at exactly 4 minutes and 20 seconds into the video.

By the looks of it, Paul even manages to get the bike up to 168 mph (271 kph), which is just a bit more than the estimated top speed for this motorcycle. Talking about his favorite part of the track, he pointed to be the technical zone between the Karussell to the Stefan Bellof S.

Paul has done about 30 to 40 laps on the Nordschleife this year, and he can already tell that his riding has become a lot smoother. "The lines I choose are still the same, but I really improved my style of riding and primarily my posture on the bike.

I also concentrate more on shifting. There are some parts, especially on the GSX-R where I tend to shift less often, to keep the bike running smooth." That's a great way of describing a fast rider or driver. Smooth is fast! 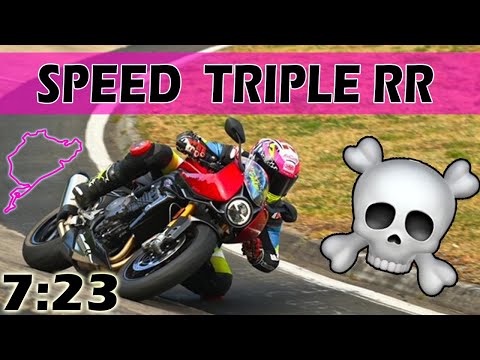