1 Death After Nurburgring Pileup Raises Questions on Safety During Weekdays

2 Toyota Corolla Gets a Nürburgring Edition, but Most of You Cannot Buy It

It has been a little over a decade since I've started being fascinated by the Nürburgring. For some people, it's just another race track. For others, it's almost a religion. The Nürburgring is a place where men and women go to test their skills, their bravery, and their machines, regardless of the number of wheels.

It has been a difficult past couple of days at the famous race track, following a tragic incident, which should have and could have been avoided. Let's just hope that future safety precautions will be taken so that everyone can enjoy their time out on the track. Let's also hope that the Nürburgring will still be around for many years to come, even in the age of automotive electrification. Happiness Is the Corner
The Nürburgring is on the top of my Automotive Dreams list. Driving a Ferrari F50 used to be number one, but right now, I'd rather choose a lap at the Green Hell in any sports car I could get my hands on. They say that if you can dream it, you can achieve it. So I've been preparing for that day for several years now. Not a day goes by without me putting in a few laps, be it in Assetto Corsa or Ride3. And I'm always on the watch for fast laps posted by other people in real life.

Going fast on the Nordschleife is not something anyone can do. Even more so if we're talking about motorcycles. Many years ago, Andy Carlile set the record at 7 minutes and 10 seconds. While companies like Porsche and Mercedes are always going back to the track in an attempt to set a new record, that doesn't happen with motorcycle manufacturers. But that's not going to stop certain riders from setting a good lap time.

Enter Paul Löhmer, a 23-year old Nürburgring enthusiast from Cologne, Germany. He recently posted a video of him taking on the Bridge to Gantry challenge on a Suzuki GSX-R1000. While he didn't set a new record, he wasn't all that far behind Andy's achievement. It took him 7 minutes and 20 seconds to go from Bridge to Gantry, which is remarkably fast by any standard. So I wanted to know more about what makes him tick.The GSX-R1000 Is the Best Motorcycle I've Ever Ridden
Paul's family has a Triumph and Kawasaki dealership near Cologne, so it only makes sense for him to be into bikes as well. His father has been a Suzuki dealer for over 25 years, which partly explains why Paul is riding a Gixxer. He started riding on two wheels as soon as he could walk, and his first bike was a Yamaha PW50. After that, he moved on to several MX bikes, ranging from 50cc up to 250cc. But at age 18, he decided to quit motocross.

I asked him about his transition to street bikes, and he told me that "My first real motorbike is also my current one, and still the best I've ever ridden: the 2005 Suzuki GSX-R1000". As I've seen with many other fast motorcycle riders, Paul's daily car was a rather normal Volkswagen Golf, with a little 75 horsepower engine inside. The moment he bought the car, he immediately installed a coil-over kit and some BBS replica wheels.

Right after buying the car, he did his first Nürburgring lap ever: "As you can imagine, it wasn't my fastest lap". It didn't take long for him to experience the Green Hell on two wheels too. But he was cautious enough to take it slow, as he wasn't yet acquainted with the layout. But how many laps do you need to start being fast? Well, over the past five years, he is now up to about 300 laps. 90% of those laps were done on four wheels, and only 10% on motorcycles.Going Down the Foxhole at High Speed Is Always Scary
Just last year, Paul took a 2020 Triumph Speed Triple RS to the 'Ring and managed to secure a time of 7 minutes and 36 seconds from Bridge to Gantry. But jumping on the GSX-R1000 helped him improve that time by another 16 seconds. Paul lives about 25 miles (40 km) away from the track, so he rode it on the way there, on the day he set the fast lap time. After five relaxed laps with a friend of his riding a CBR600RR, he decided to go all out on the 6th one.

We get a POV perspective of the lap, and several moments feel terrifying, to say the least. Paul has a very smooth riding style, which is extremely important when you're on two wheels. "The scariest part of that lap was sliding into Wehrseifen, a very slow corner turning left after a fast triple right section. That made me sweat a little more. But I must say that going down the Fuchsröhre (Foxhole) at 260+ kph (161 mph) is f**cking scary on every lap..after 5 fast laps on two wheels I'm mentally exhausted".

If you're wondering about the setup on his GSX-R1000, there's not much to say about it. It has a quick shifter, racing brake pads, a Bodis slip-on exhaust, and Metzeler Racetech RR tires. There are no suspension modifications whatsoever, but the bike does get proper maintenance to ensure everything is working at 100% capacity. Paul is just 10 seconds behind Andy's lap record, but is that a significant difference or is it not?

"7:10 is extremely fast and 10 seconds less makes for a huge gap to recover. Of course, I will try to get faster than my 7:20 lap, but going faster than 7:10 with a nearly stock GSX-R K5 is a very big task. But that doesn't mean I'm not going to give it a go". After seeing his Triumph lap, there's no doubt that Paul could be faster if he was riding something with an efficient Traction Control and ABS systems on.

From the looks of it, he would fancy having a go at the record while riding a brand new Yamaha R1. Last but not least, I asked Paul for a piece of advice for any motorcycle riders that would love to have a go at the 'Ring: "Adjust your mirrors properly, and just go for it! But just don't do it during the weekend. Go for the weekdays in the evening, have fun and take it easy!" And on that note, I'm off to see how fast I can go GSX-R1000 K5 on the Nordschleife in the virtual world. 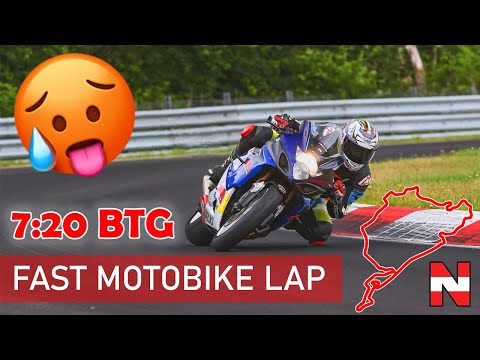