3 Would You Buy This Damaged Porsche Carrera GT Supercar for $400,000?

Porsche Carrera GT Hits the Track for the First Time, Goes on the Nurburgring

Porsche's Carrera GT, or Type 980 as the company's engineers liked to call it, is getting more and more valuable, as the first examples are almost 20 years old now, and it was made in limited numbers. To be specific, Porsche made just 1,270 of these over four years, and not all of them still exist.
9 photos

Unlike regular news covering the Carrera GT, this example is not for sale right now, nor was it crashed somehow. Instead, the German mid-engined sports car gets to be driven on the Nürburgring Nordschleife for the first time, which is what its makers intended to happen more often. Instead, as Misha Charoudin finds, this is the vehicle's first time on a track, ever.

Yes, you read that correctly, Misha got to take a lap of the world's most demanding racetrack in one of the vehicles that are renowned for their accuracy, but also for an unforgivable character if you make a mistake.

Misha's courage went even further as he got a ride in the said car on said track with someone who was taking it on the track for the first time. The driver, who is believed to be the owner of the vehicle, was fortunately not driving it for the first time, though.

Despite this, the driver asked not to be named, and he also told Misha to not show his face on camera, but he made this request after the video was filmed.

With such a tough request in mind, Misha had a bit of fun and implemented the SpongeBob SquarePants face filter. Genius move right there, and everyone is happy that we do not just see a blurry face.

Instead, we get to see what "SpongeBob" can do behind the wheel of a Porsche Carrera GT that gets tracked for the first time. In a way, you have to admire the courage of this person for taking a vehicle that is worth over a million dollars to the world's most demanding racetrack.

As you may be aware, while the Nürburgring is considered a toll road in Germany, that does not mean that most insurers will cover damage that occurs there.

So, if you happen to slip up while driving one of the most demanding cars of its era, even with the correct reaction to the situation, you might still have an expensive accident on your hands.

Mind you, the latter part is a risk because mid-engined vehicles are more stable than front-engined or rear-mid-engined ones, but if they are unsettled or lose grip at high speed, you might not have enough room to get them back on the right path before hitting anything.

If you have seen any footage of the 'Ring before, you are well aware that runoff areas are not excellent, so choosing this track for the first circuit to let a Carrera GT stretch its legs is either the best possible decision or a terrible decision, depending on the outcome at the end of your session.

We already knew that the clutch was expensive, which is something that the unnamed driver in the video was attempting to protect, along with the gearbox, but that is not how you protect these elements if you ask us. 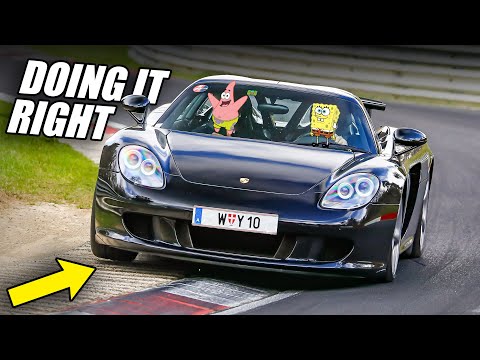