1 Cupra Asked for a Folding E-Bike and Got This Trendy, Stable, and Comfortable Two-Wheeler

Listen, we get it; you don't want some insanely priced bike that you may never use to its fullest capacities. In this spirit, we'll be taking a look at Giant's Roam 3, a little two-wheeler with some spunk for low bucks.

Roam 3 Is a Ready and Willing Endurance-Infused Wonder Priced Well Under $1,000

Folks, let me just jump right into things and say that Roam 3 Disc seems to be one of the less expensive bikes from the Giant Bicycles family. However, that doesn't mean it can't handle what you throw at it.

Now, what you're looking at is a bike that Giant has currently priced at 760 USD (678 EUR at current exchange rates); that's it. And while a bike under 1,000 USD may make you wonder about what it can do and how it'll be doing it, keep reading and reach a conclusion after you've gathered some intel.

Overall, Giant is using Aluxx-Grade aluminum, which is short for Giant's proprietary blend and technique of crafting a frame. For this machine, it appears to be 6061 single-butted aluminum.

The tubing and geometry of Roam 3 appear to be borrowed right off of other Giant bikes, their endurance, and gravel machines. An angled top tube and dropped seat stay conjunction gives it that impression.

The tubing looks rather neat and clean, mainly how the top tube thins out towards the seat tube. A pretty solid head tube will be holding on to an SR Suntour fork with 63 mm (2.5 in) of suspension.

One added bonus that Giant seems to be offering future owners is the possibility to add racks, renders, and an array of other extras you may need on your next trekking trip. The down tube, seat tube, and seat stay all feature mounts for this sort of gear.

While you think you may have to ditch the front rack or pack because of the suspension, don't, as some manufacturers on the market are now able to create rack systems for suspension forks. A nifty addition, if you ask me.

One feature that I found different from other bikes with this sort of frame is the in-house flat bar handlebar. To add more comfort to the cockpit, ergonomic grips are added. All lines are also housed internally, a feature we often see nowadays, even on affordable bikes.

As for the drivetrain on this puppy, who to expect for this budget? If you guessed Shimano, you're correct. Giant uses Altus shifters to move an Acera rear derailleur and FD-TY710 front derailleur. This is because Roam is equipped with a 2x8 setup, giving you enough range to play around with. You'll find Tektro M275 hydraulic brakes clamping down on 160 mm (6.3 in) rotors for braking.

Even though there is a fork on this bike, two more suspension systems are found in the shape of a set of Giant CrossCut Tires with 700x42c dimensions and a D-Fuse seat post. If you've never heard of D-Fuse, it's Giant's way of creating a seat post shaped like the letter "D" that flexes just a bit to reduce vibrations.

As for Giant Bicycles, what's there to say, really. Just turn on your TV to any cycling channel, and chances are that you'll see a Giant bike in the next minute or so. After all, they've been around since 1972.

All those years of trial and error and cycling success are all wrapped up on this neat little Roam 3 bike. Best of all, it's not going to burn a hole in your pocket. Always wear a helmet no matter what machine you're riding. 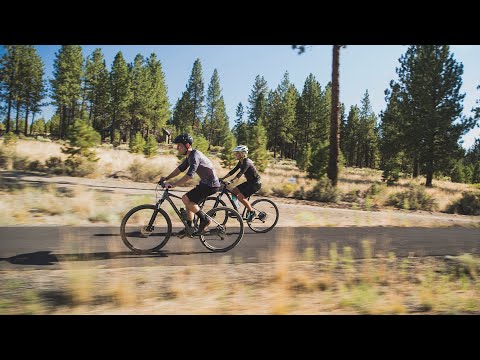