1 Crighton Reveals New MotoGP Like CR700W, Rotaries Are Back!

2 CFMoto Reveals SR-C21 Concept, It Could Be a Yamaha R7 Rival

5 Kawasaki GPZ900R Ninja Went From Weary to Eerie After a Custom Transformation
Car video reviews:
Up Next

Riding a motorcycle on public roads is one of the most exhilarating things you can do in life. Taking it to the track will have your adrenaline level skyrocket! That's because on the track you can push the bike to its limits, or in some cases, to your limits. You'll have more fun in a few fast laps than you would in a full weekend on the road.

We've talked about what it takes to become a professional road racing rider in a previous article. If you've never ridden a motorcycle before or have limited experience, a 300cc bike is a perfect way to start in this industry. A 300cc motorcycle won't feel terrifying to ride, and it will allow you to learn some of the key elements of the sport. Also, you should consider the financial implications, as at this level, everything is much cheaper to handle.Building is about getting around the obstacles that are presented to you
A few years ago, I signed up to support a local sports club that envisioned the idea of a Road Racing School for kids. The project started boldly, with a total of three pupils: Daria, Alex, and Vlad. Alex had 0 riding experience, Vlad only rode his 125cc on public roads, and Daria was the most experienced out of the three. She has been actively racing for several years now and had just made the step to a Kawasaki Ninja 400.

The bike received a series of upgrades, including a restrictor to make it eligible for the World Supersport 300 category. She was 17 years old when she won an International Championship riding that motorcycle, and Alex felt inspired to walk down the same path. After trying out a Yamaha R25, he also made the switch to the Ninja400. I sat down and talked to Florin Calin, the team manager, about what it takes to make a motorcycle like this competitive on the track.

The tuning process has to be done in compliance with the rulebook of the series that you are going to race in. For WSSP300 regulations, motorcycles with a displacement of over 300cc will have to use an air restrictor and a special kind of pre-approved ECU to limit the power. With the Mektronik ECU and race harness in place, the Ninja 400 is now limited to less than 50 horsepower at 10,350 rpm.The biggest room in the world is the room for improvement
But installing a new ECU and harness is just a small part of the job. You'll need to remove the bike's original fairings and get a set of fiberglass or carbon fiber ones instead. The ABS also has to go, along with any other sensors or elements that were intended for street use. A full-exhaust system will go a long way, especially if you can get a titanium one. Both Daria and Alex have Arrow systems on their bikes, but an Akrapovic would be ideal.

The standard bike pegs have no place on a race-spec motorcycle, and the same goes for the original handlebars. Upgrading these two elements will allow the rider to increase their lean angles, which can be crucial when going fast around the track. I was somewhat surprised to hear Florin's recommendation of installing a steering damper as well. It's well known that these parts can prevent death-wobbles when riding a more powerful bike, but they're also as efficient on a 300cc motorcycle.

Both of the Ninja 400s shown in the gallery are now running an Öhlins rear-suspension setup. This kind of upgrade can help shred valuable seconds off a rider's lap time, and it could prove to be more important than any other engine upgrade. For those running a tighter budget, K-Tech is a good second choice after the Swedish manufacturer. Remember, it's extremely important to play by the rules when upgrading your motorcycle for a specific championship!What's behind you doesn't matter
No kind of liquid spills will be tolerated, so be sure to take all precautions necessary in that regard. Tank foam will go a long way in preventing unwanted fires in case of a crash, so even if it sounds like a minor improvement, you should still do it. Of course, upgrading the braking system is going to be crucial, as it will allow the rider to brake as late as possible going into a corner.

The kind of tires you'll choose for your Ninja 400 will depend on several factors, including your current skill level, the type of asphalt you're running on, and of course, your budget. While Pirellis seem to be the best choice, all in all, you should neglect the idea of using Dunlops if you're thinking about cutting down on costs. After you've assembled all the parts, it's time to pay a visit to the dyno.

Expect to spend anywhere between two hours and a whole day there. Fine-tuning the bike can be a lengthy process, but if you want it to work at its maximum potential, you should be willing to put in the extra time and effort to achieve your goal. Of course, all these upgrades wouldn't mean anything without proper training. Always take things one at a time. The more miles you ride, the more things you'll learn.

Maintenance is also crucial if you care for your motorcycle, and you should perform an oil change every about 310 miles (500 km)! Motul's 15W50 is the only kind of oil ever used on these two Kawasakis, and that's due to its extremely high boiling point. One particular issue with the Ninja 400 seems to be its gearbox. After around 1,553 miles (2,500 km), you'll notice that you have to put in more work in shifting up or down.

This might just be the biggest disadvantage of the Ninja 400, at least when compared to the Yamaha R3. But all in all, it's a great first track-weapon, and it can lead the way to some strong results in the upper echelons.  The following video shows how nimble the Ninja 400 can be, especially on a smaller track that doesn't require a whole lot of power. 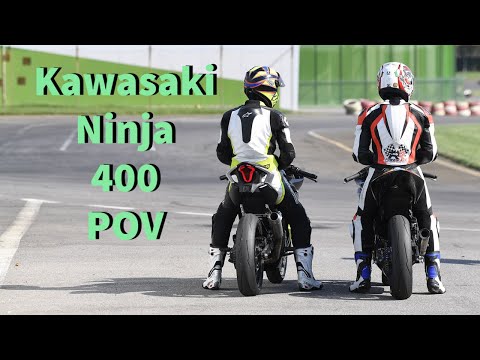