Tesla Model S Plaid vs Modded Kawasaki Ninja ZX-14 - "How the Hell Did You Beat Him?"

It hasn't been that long since Tesla launched the Model S Plaid and we've already reached that point where we're running out of cars to race it against at the drag strip.
8 photos

The only thing that can still sting the Plaid is a heavily modified, purpose-built car. There is no shortage of those around the U.S. but even when it loses to one, the Model S still has the fact it's a family sedan with all the modern comforts of luxuries you would expect to cling on. Look, it's getting old, but we feel like it has to be said: the Tesla Model S Plaid is simply insane. If you ever needed a reason to like Elon Musk (or at least not hate him), then the fact he made the Plaid possible has to be it. Sure, on the other hand, he's also the one who killed the Plaid+ - this man just doesn't want to be loved.

So, what do you do when you run out of cars? You start racing bikes, obviously. Well, on this occasion, it wasn't necessarily Andrew's choice (the man behind the YouTube account Tesla Plaid Channel), since he got called out by the owner of a Kawasaki Ninja ZX-14. Aren't we glad he did, though.

We don't know the exact specs on that bike since it's been modified - the extended swing arm being the most obvious, but Andrew says it's a 1,352-cc version, meaning it can't be newer than 2011. No idea how much power it makes, but we guess that's part of the thrill of going up against one of these mysterious opponents.

Before we get on with the race (and it's truly a very exciting one), can we just stop for a moment and acknowledge just how much dangerous drag racing is for bike riders? Andrew's cameras catch the bike rider just before the race, sitting on his machine with his head down. He assumes he was praying, which is a valid option, though he might have just been clearing up his mind and getting in the zone. He wasn't doing that to win, he was doing it to stay alive while trying to win.

They opted for a rolling start since doing it form a dig would have given the Tesla an obvious advantage, and it was a good thing they did. Even so, the Tesla's instant torque still meant the car rocketed forward at the starting line while the bike was building revs to get into its optimal power band. From there, the Kawasaki ZX-14 begins a slow but steady process of reeling the EV in, but the quarter mile is over before it can do it. The gap? A whopping 0.02 seconds. With numbers like that, expect a rematch soon. 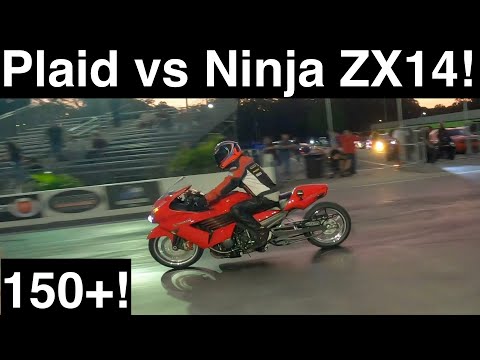