Revealed at a charity event, the 2020 Tesla Roadster was the modern supercar from the American electric-car manufacturer Tesla.

Tesla built a few models since 2008 when the first Roadster came out from the factory. By 2020, the Model S, Model X, and Model Y started to be seen worldwide. It was not just a local brand anymore, and the electric-car revolution started to pick-up. Other car-manufacturer followed the trend, and soon, Tesla was not the only one to charge its cars at supercharger stations. But they began to lose ground in the performance area.

The 2020 Roadster came to fit in the performance segment and show the world who's the Daddy. It was designed without door-mirrors so the wind-noise won't give it any more troubles. Like the first, 2008, Roadster, it was more of a Targa body than a real roadster since the B-pillars and the safety arch remained in place, and only the glass-panel above the occupants was removable.

Like the 2008 Roadster, the 2020 model-year featured just two seats. Tesla already built enough 5 or 7 seat vehicles with four or five doors. The 2020 Roadster offered two doors and two seats. Unlike its predecessor, the interior was more up-market. The already traditional portrait-mode big screen on the center stack provided the necessary information and car's settings, including the Ludicrous mode.

The powertrain consisted of four motors, one for each wheel. Just a quick reminder, the 2008 Roadster had only one motor. The total power output and the light construction allowed the 2020 Roadster to rocket from 0 to 60 mph (0-97 kph) in less than two seconds! 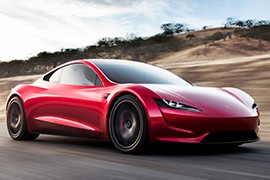