The Model Y was teased by Tesla for a few years.

When the market started to switch toward the SUV vehicles instead of station-wagons and MPVs, it was the right time for Tesla to show something in that segment too.

The Model Y was a complete package: an SUV, an MPV and, on top of that, a supersport vehicle that made a lot of petrolheads burst into tears when they were smoked on the drag-strip by a big and heavy SUV that didn't sound like a car. It didn't sound at all.

The Model Y was unusual for its time. It still had a front end of a car, but without a grille, as in radiator grille. Since it didn't have an internal combustion engine, it didn't need one. It had some radiators to cool the engine and the batteries. The front doors were opened into a conventional way, but the rear was like a gull-wings, which provided access to the rear 5 seats. The Model Y was available with 5 or 7 seat option, with two-wheel-drive or all-wheel-drive, with bigger or smaller autonomy. It was the SUV that could take a family up to 500 km away in one charge.

Inside, all the buttons and controls were on a 15" infotainment display. The driver had a steering wheel, though. But sometimes it didn't need that either since the Model Y was capable of a high level of autonomous driving. But, in the end, it was a vehicle that, in its top-spec version, to offer a 0-100 kph (0-62 mph) sprint in 3.5 seconds. 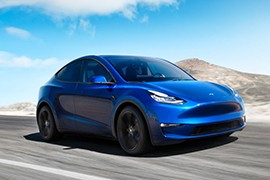