After the successful Roadster, Elon Musk understood that a four-door vehicle was needed on the electric car market.

A market that Tesla created.

The electric car revolution started when a sports car with an internal combustion engine lost a drag race in front of an anonymous car-manufacturer with a motor powered by a set of batteries. The introduction of the Model S made things look even worse for the sports-cars fans. The plastic-looking, silent vehicle challenged more and more supercars.

The world was not ready to see a car without a grille in the front, even though the Model S didn't need one. So it featured a black plastic panel instead. The sharp, angular, headlights were fitted with LED in a time when the bi-xenon headlights have dominated the market. It was way ahead of its times. From the sides, the sleek and aerodynamic profile resembled a sports car's look, but it featured four doors.

The interior was had a shocking look for its times. The minimalist design featured a dashboard dominated by a huge, portrait mode, 17" touch-screen placed over the center stack. It was fitted as standard with internet compatibility and over-the-air updates. The system controlled various car functions, including the charging, drive modes, and climate control unit. The car featured a panoramic glass roof. Due to the lack of a transmission tunnel, the flat floor allowed better legroom for the rear passengers, and the big wheelbase made the things even better.

Tesla installed a floor-mounted battery pack, consisting of laptop lithium-ion cells. Depending on the version, it powered the rear or all-wheels via two or four motors. The performances were stunning for its segment. The slowest version could reach 100 kph (62 mph) from standing still in 6.1 seconds, while the top model P90D did the same test in only 3 seconds. 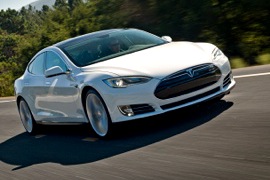