5 780 HP Audi S2 Quattro Races Ferrari 488 Pista, Can You Guess Who Owned the Speed Trap?
Car video reviews:
Up Next

Audis have quite a reputation when it comes to drag racing, and their quattro all-wheel-drive system is partially responsible for that. However, the models that instill fear in their opponents usually have the two magic "RS" letters in their name. This Audi only has half of them.
7 photos

It's pretty hard to overstate just how big of a difference that one letter makes. The performance gap between the Audi S3 and the RS3 is massive, and it all starts with the engine. The entry-level sporty version gets a 2.0-liter four-cylinder turbocharged engine (more or less the same unit you'll find under the hood of all gasoline-powered Volkswagen Golf performance models) developing just over 300 hp, whereas the RS gets an extra cylinder for a total displacement of 2.5 liters and about 100 hp more.

But even in its slightly tamer form, the Audi S3 is still a formidable foe, something the Infiniti Q50S is about to find out the hard way. To be fair, the two cars aren't exactly direct competitors since the Infiniti belongs to a superior class (which would make the Audi S4 a better fit), but in terms of power, transmission, and price, they're pretty level.

The smaller size means the S3 is going to be lighter, though, and if you click play on that video and you have your headphones on, you'll also notice its exhaust doesn't particularly sound stock. Could it be hiding any more modifications under that hood?

They don't say but given the weight difference alone, not to mention the superior traction system, everything else on the S3 might as well be just like when it first left the dealership. The 3.0-liter twin-turbo engine does have plenty of power in reserve, so if the owner wants it, he should have no problem getting out with a few modifications – or even just an ECU remapping, to begin with.

Judging by his face once he gets behind the wheel of his car, he might just go ahead and do that. The disappointment on his face as he sees the Audi S3 dart forward is meme-worthy. He thought he had a quick car but, right before our eyes, he realizes that was just an illusion.

The roll race seems like an opportunity for the Infiniti to gain some dignity back since it pretty much removes the advantages offered by the quattro AWD system. However, it's plainly obvious that wasn't the only thing that was better on the Audi, but pretty much everything as well. 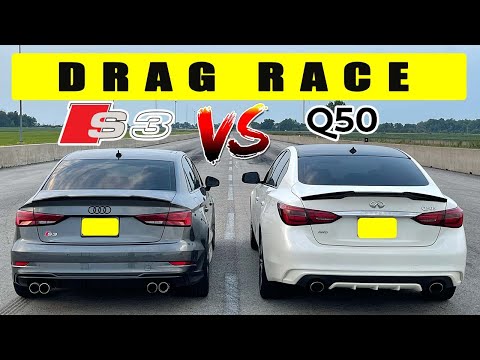