1 UK-Spec BMW 128ti Gets Out in the Open, Photo Shoot Follows

The orange hatchback in this video marked the beginning of the end for the French hot hatch. But instead of being sad, we'd celebrate the power and performance of the Clio RS Trophy.
3 photos

The Clio is one of the most popular cars in Europe, right up there with the VW Golf. A new generation recently came out, and it has a fantastic interior (for a cheap car). However, that can't compensate for the loss of the RS version. While Renault never made an official announcement, we know that making another 200+ horsepower version is nearly impossible due to emissions regulations.

And so we're left with the Clio 4 RS, which didn't exactly live up to expectations. The model went from having a 2-liter engine with a manual gearbox to using basically the Nissan Juke 1.6-liter turbo hooked up to an auto. It didn't get any extra power, but it was pretty fast, and it actually found many new buyers.

The Trophy model is more track-focused, with track suspension, supposedly quicker gearbox shifts, and a power bump of 20 hp. The one in this review by AutoTopNL has a claimed 250 French ponies under the hood, which is more than a new Golf GTI. With this extra pushing power, the car is able to hit 232 km/h or 144 mph on the de-restricted German autobahn network, but that's honestly not mind-blowing.

What we find a bit more interesting are the mods, which include a scoop in the hood and pipes from Renault's preferred exhaust supplier, Akrapovic. It sounds a lot like a MINI GP. There's also a big wing, just like the one from the RS 16 concept and the Clio Cup race car. It completely changes the look of the little 5-door.

So if you wanted a small hot hatch from the late 2010s and had a limited budget, which would you have? The obvious candidates would be the Peugeot 208 GTi, the Polo GTI, MINI Cooper S, and Ford's Fiesta ST, to name but a few. 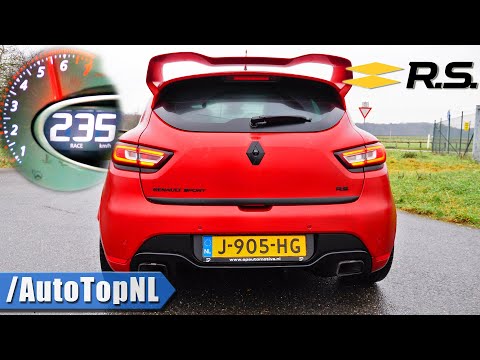