2 Would You Buy Hennessey's VelociRaptor 400 Instead of the Stock Ford Bronco Raptor?

4 Rapper Fabolous Turns Into O.J. Simpson for Halloween, Has the Ford Bronco to Prove It

5 The Bronco Might Be the Star of the 2022 SEMA Show, Yet Ford Is Nowhere in Sight
Coverstory

Home > News > Custom Cars
Aurel Niculescu
Ever since the Blue Oval company announced the impending arrival of the reinvented, sixth-generation 2021 Ford Bronco, this off-road-focused SUV has remained one of the most hyped vehicles across the entire automotive industry.
10 photos

And even though we can already order and build our perfect OEM Bronco for the 2023 model year starting at an MSRP of $32,295 (for a Base 2-Door) and going up to no less than $73,780 for a Bronco Raptor, the tuning, customization, and personalization ideas keep flowing like it’s the model’s first day of release.

There is no need to take our word for granted. Just look at all the 2022 SEMA Show builds if you need valid examples. Or, perhaps, embark on a world-first type of journey alongside a vlogger and a cool Bronco owner. Outdoor and off-road enthusiast Chase Gentry (also a Team Bronco ambassador) now directs our attention toward a more unique approach compared to all those fabled Bronco adventures.

And this is because Darin Mathew Spreadbury, an Arizona-based father of three, monkey wrencher, and fabricator at the Ford Arizona Proving Grounds has taken the liberty of simply chopping up a 2-Door (base) Bronco in half to make sure the 2.3-liter 2021 Ford Bronco Badlands 4-Door has a matching trailer companion!

As far as we can tell, the level of detail is unmatched, as the half-Bronco trailer also comes complete with the spare wheel and a couple of beadlock 37s to keep it tightly alongside the modified 4x4 trailering rig. Now, this neat idea – which is not necessarily something we have never seen before, even with sports cars – begs a quick question.

What are Ford Bronco aficionados going to come up with next in order to keep standing out in the massive enthusiast crowd? Are they going to send it into space or something like that? 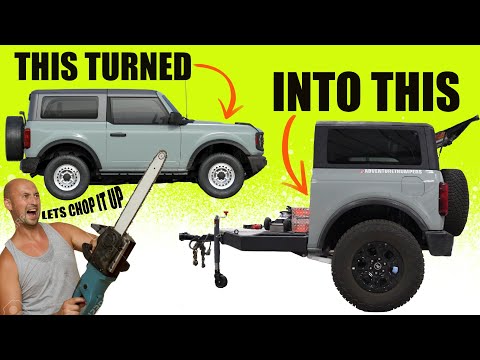