5 This Is the “Timeless Addition” to Moe Shalizi's Fleet, a 1995 Porsche 911 RWB
Car video reviews:
Coverstory

McLaren’s 765LT might be an incredible, limited, special series version of the 720S supercar with just 765 units sold worldwide and a 755 hp/765 ps engine to make the Super Series Longtail fans proud. But, as it turns out, some people still get bored of it, even when not in stock form.

The McLaren 720S was only the second all-new model in the McLaren Super Series in May 2017 when it replaced the 650S. But it grew to legendary status with ample series expansion (Velocity, Spider, Le Mans, etc.) and paved the way in 2020 for the mind-boggling 765LT. The new monster had a tuned version of the M840T engine with more power and better acceleration time of zero to 100 kph/62 mph in just 2.8 seconds – and was at one time America’s darling when it came to dealing with stock quarter-mile dragstrip shenanigan records.

Now it is bested by many others – including EVs (like Plaids, for example!) and that may mean that it is time to move on. At least that is what Moe Shalizi, the talent manager and record industry executive who is linked to DJ Marshmello, is currently doing. The CEO and founder of The Shalizi Group and Pick Six Records, as well as the co-owner of the marshmallow brand Stuffed Puffs (!), has been giving us many updates on social media as of late regarding his man cave and associated garage treats.

For example, this year alone we have seen him sell a black Rolls-Royce Cullinan which used to be his “baby” just to splash on a blue Superlite SL-C with a Lambo engine, a 1998 Toyota Supra, a Nissan GT-R Alpha 16, ride to private jet affairs in a Ferrari SF90 Stradale, play with a timeless 1995 Porsche 911 RWB, and just recently trick or treat on a dark and menacing Lambo Aventador SVJ that is currently going through major transformations.

As it turns out, he also decided to make room for the new additions to the collection by way of selling some of his “older” cars, including the Superlite and a stunning Army Green-wrapped McLaren 765LT that very few people knew anything about. Well, not including the good folks over at Hollywood, California-based RDB LA have another YouTube vlog episode out and about, though we are not interested in bad Cullinan widebodies.

They lament the state of the aftermarket widebody industry with an on-point $600k Rolls-Royce that needs a complete makeover, but we are not even interested in that cool Porsche 911 or Shalizi’s Lambo Aventador SVJ they have in the shop to get a lot of Satin Carbon Fiber Black things done. This is all because they also have a section dedicated to the mysterious 765LT in the video embedded below. And, as always, they let slip some interesting details about the project build.

After the guys find the car standing in an unprotected spot, we start peeling off the layers of mystery to get confirmation this is indeed Moe Shalizi’s McLaren 765LT that is not just one of the 765 units of the special series. Instead, it could also be a unique Army Green custom as few dared to go that route – aside from RDB LA who have also done it on the smaller 720S sibling. Anyway, the reason this McLaren is back in the shop is clear – sadly, it is going to find a new home and will be reverted to stock form.

So, after watching this video, one might want to say goodbye to one of the most extreme 765LT transformations – not just visually on the account of the Army Green wrap and all the rest of the aftermarket goodies, such as the 1016Industries front hood or the black wheels, but also technically. That is when we finally find out this McLaren has been lowered closer to the ground to make it a “new generation street jet,” but also had the exhaust reworked to sound even nastier, plus it was treated to an undisclosed increase in power by way of an engine tune. 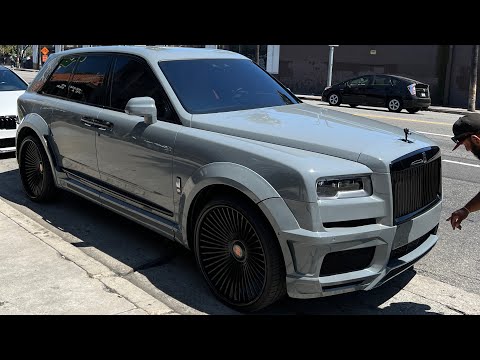