McLaren expanded its LT family with the high-performance McLaren 600 LT, a faster version of the entry level McLaren 570s.

The “LT” nameplate actually meant “Long tail” and was inspired by the McLaren F1 Long Tail.

The most performant McLaren’s car at the time, the McLaren 600LT was lighter by 96 kg and got 30 extra ponies under the hood compared to the 570s, having a total of 592 hp given by the powerful 3.8-liter twin-turbocharged V8 engine. The power was sent to the rear wheels through a 7-speed dual-clutch transmission.

McLaren has paid tremendous attention to details when building the 600LT and even started with the key fob, which had an unusual shape and an innovative trunk opener button. Instead of looking to see which the button was dedicated to open the trunk, drivers just needed to put their finger on the front key surface and feel two little bumps. Design wise, the little bumps were actually the wheels of a drawn car.

From the outside, the 600LT’s doors drew immediate attention, looking more like two levels of doors with the air intake between them. The scissor doors had hidden door “handles” under the top layer of the door. From the inside, the electric doors would open by the press of a push-up door handle. Just in case the car’s battery would had been drained, the 600LT was equipped with a manual door release system as well.

Inside, the cabin was fitted with grippy carbon fiber bucket seats that were manually adjustable. No power seats were available, as the main focus was on weight saving. And also related to weight saving was the rather “unfinished” bare carbon fiber floor under the car’s floor mats.

Storage spaces were limited, however, McLaren did some tricks to still offer room for a phone or a coffee. There was a cupholder placed underneath the dashboard, a storage net between the backrests and one at the passenger’s feet. 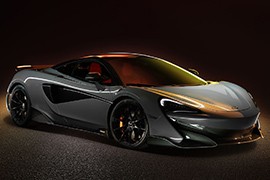 2 McLaren Might Lose in F1, But They Won Toy Vehicle of the Year With LEGO