4 Honda Civic EF Goes From JDM Hatchback to Sedan, You Won’t See It on Any Road

If you take a look at the full lineup of new vehicles available in the Dodge portfolio today and don't know any better, you might be fooled into thinking a carmaker with just three models on offer is surely on its way out the door. But the thing with these three models is they are at the top of the food chain in their segments.
16 photos

Dodge presently sells the Charger, the Challenger, and the Durango, and not much else. Each one of them is however a heavy-hitter, vehicles that have completely reshaped the automotive industry in more ways than one, thanks to the many variants they’re available in.

The two-door Challenger, for instance, is selling for the 2022 model year in no less than 11 variants (and with not that many changes compared with what came before), starting with the $30,075 SXT, and ending with the almost three-times as expensive ($84,080) SRT Super Stock.

A large pack of the offering consists of the Hellcats, coming in SRT, SRT Widebody, SRT Redeye, and SRT Redeye Widebody flavors. Quite impressive machines, both visually and mechanically, but not impressive enough in stock form for many of their customers.

Perhaps it’s too early to talk about customized 2022 Challengers (even if, again, they’re basically the same as the cars offered in previous years), but if the past is any indication, the physical world will probably soon be flooded with custom creations, and so will the virtual one, populated by extreme renderings.

Until we get there, the first Challenger custom build of the year comes not in the form of a real car or a rendering, but a Hot Wheels toy. One that got turned into an extreme miniature vehicle by a shop Jakarta Diecast Project.

Hot Wheels has the Challenger SRT in its portfolio since 2015, and we’ve seen it transformed into a custom toy on more than one occasion. This most recent incarnation though, with Charger Daytona vibes, really stands out as a build we wouldn’t mind seeing on the real roads, full-size.

You can enjoy the build process in the video below. 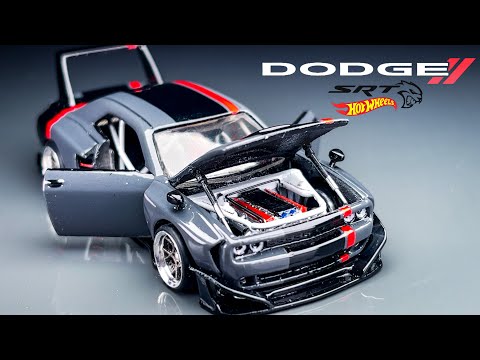