3 Honda Civic EF Goes From JDM Hatchback to Sedan, You Won’t See It on Any Road

There are just a few cars out there that have achieved cult status over the years, and the Nissan Silvia is, in some circles, one of them. The Japanese machine, born in a time when Americans were just discovering their love for muscle cars, is now officially off the market, but people still dream about the Asian beauty.
13 photos

Not all can afford one, though. Sure, a stock Silvia from the S13 generation, for instance, will only set you back several grand, but countless others will have to be spent to bring the beast to at least S15 Fast and Furious status and appearance.

For true fans of the Japanese model, no matter its shape and size, there might be a cheaper alternative. Hot Wheels has been making the latest iteration of S13 Silvias since 2020, and like with all things in life, if you don’t like it stock, you can have it modified.

One idea on how to do that comes from Hot Wheels customizer Jakarta Diecast Project (JDP), whose work we’ve featured here on autoevolution before. The latest JDP idea is a beefed-up Silvia that looks like it’s a perfect fit for any drift circuit on the planet.

Looking like something straight out of Need for Speed, the Silvia was dismantled, stripped of its original paint and then remade into something that in the right light and from certain angles looks even better than some real-life builds out there.

Sporting an open front end that gives us a look at the reinforced chassis, radiator and engine, and a massive wing at the back (also bumper-less), the Silvia is now wrapped left to right in a Rocket Bunny-like body kit, painted in the purest Japanese style.

Sure, it can’t beat the real thing, but keep in mind this is something that almost anyone can afford, or, going further, can try to recreate in their own home. 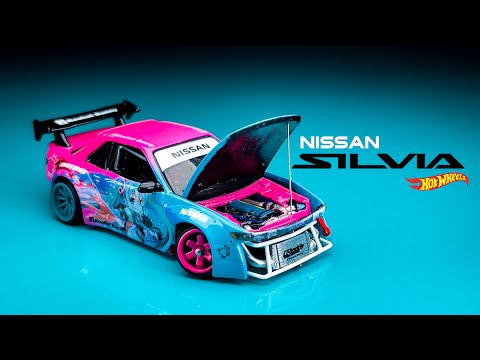