2 Honda Civic EF Goes From JDM Hatchback to Sedan, You Won’t See It on Any Road

In the world of custom car builders, talent is aplenty. That’s because this is an industry one does not get involved with if enough talent, ideas, and money are not easily available. But as with all other things in life, custom car builders are not created equal.
9 photos

One of the names instantly recognizable as one of the pillars of the industry is Kei Miura. The shop, based in Japan, is behind some of the most insane aero kits ever devised. They’re so famous, these kits, that they even have earned their own names, like, say, Rocket Bunny.

Sporting several features that make the line of aero kits famous, this type of bodywork can be seen on a large number of cars on today’s roads – true, maybe not on the average road next door, but still very visible if you know where to look.

The style is so famous that some have even taken it past the real world, and into the realm of miniature, scale replicas of real cars. Just like the talent behind the Jakarta Diecast Project (JDP) YouTube channel did with this Honda Civic.

The wonderful build you can admire in the gallery above (and the video below) started life as a white Honda Civic Type R, but not a real one. We’re talking about a Hot Wheels replica, the kind of which the toymaker has been releasing into the wild for a long time.

As usual, JDP was not particularly pleased with the stock way the Civic looked, so they set out to modify it, and gifted it with a Rocket Bunny body kit to die for, backed by a simply mammoth rear wing, and painted in such a way as to really seem aggressive.

The almost 20-minute video below details the transformation of the stock Hot Wheel into a Rocket Bunny build, and we’ll let you enjoy it, as images describe such a process better than any words could. 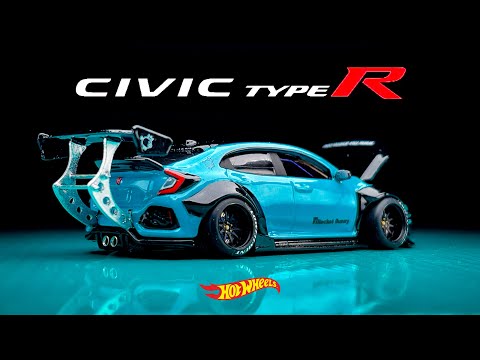