Just 112 units of the second-generation limited-edition Lamborghini Countach LPI 800-4 will ever roam the world’s streets. One of them recently did. In a celebration of its legacy, alongside a couple of predecessors. And it looked underrated...
9 photos

Sure, it gladly roared and filled the air with its mid-engine hybrid V12 powertrain. To many, it looked just like a swish Italian knight in shining-white minimalist armor. But that’s the biggest problem, according to its detractors. And the issue was probably exaggerated by two older Countachs lurking in the background. They both looked a tad more untamed – just like a Lambo should always be.

So, do we need to wonder how come even after so many months have passed since its introduction and the Countach LPI 800-4 remains a darling of the automotive virtual artists? Just recently, Khyzyl Saleem, the pixel master better known as the_kyza on social media, has kicked off a brand-new YouTube behind-the-scenes series alongside Hagerty.

Their first episode of “Rendered” focuses on the 2022 Countach hybrid that is just preparing for its first deliveries. The logic behind the redesign is simple: “even though we can thank Lamborghini for bringing a classic back to life, Khyzyl thought they didn't unleash the full potential of the iconic 1970's Countach that we all know and love.”

Thus, here is an unapologetically cool (yet virtual) new Countach. One that is slammed, widebody, and clad in aero tweaks. The sort that brings back the “iconic bits and pieces from the iconic 1970's supercar.” Even this might not be everyone’s cup of tea. But do not worry, there are many more CGI reinterpretations out there. One will surely strike the right note!

Additionally, this is just the appetizer, as the digital artist has promised “over the next few weeks I’ll be creating some really cool cars, hope you’ll enjoy it!” Bet that we will, on the condition that he keeps up the great virtual work... 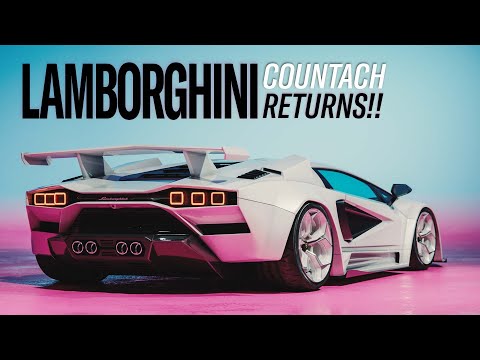