Lamborghini had a long history of producing Performante versions for its supercars, but in 2022 it carried over that technology to its crossover Urus.

When the Italian carmaker introduced the Urus, the world was stunned. While it wasn't the first high-rider in its history, it was the first designed to storm the high-performance crossover market. When that was not enough for its customers, Lamborghini introduced an even fiercer version: the Performante.

Lamborghini's Performante vehicles sported modified exteriors when compared to their regular siblings, and so was the Urus. It featured a new, sharper-looking front bumper with distinctive side scoops and a trapezoidal-shaped lower air intake. The hood featured a black center area to reveal the carbon-fiber material used to make it. From its profile, the Urus Performante showed a lowered ground clearance by 20 mm (0.8") due to the new steel suspension. At the back, the spoiler sports carbon-fiber fins resembling those installed on the Aventador SVJ.

The cockpit's interior features Nero Cosmus black Alcantara as standard, along with the "Performante trim," a new hexagonal seat stitching pattern, and other choices, including leather upholstery. In addition, Ad Personam customization choices include matte carbon fiber accents, red door handles, and a personalized kickplate with the Ad Personam emblem. Both the inside aluminum trim and the black Alcantara/leather steering wheel are finished in matte black. The same finish can be extended to other interior features with the optional "Dark Package," including the lever on the Urus's central "TAMBURO," which houses controls like the start/stop button and drive mode selector. 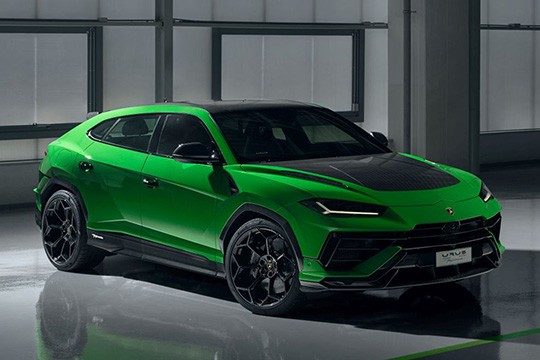