1 The Hike 100 Is the Smallest Winnebago Yet, But Still Competent

Dreaming of a bright, carefree and clearly affluent future, what a beautiful way to pass the time! But when you sell products that turn dreams into reality for a living, dreaming becomes second nature.

Knaus Tabbert’s Carvisio: The Beautiful, Tech-Packed RV of the Future That Never Was

October is autoevolution’s Iconic Vehicles Month, a month-long virtual celebration of dreamers and pioneers of all kinds, with varied powertrains and more than two wheels, who left their mark on the world in one way or another. Knaus Tabbert, the German maker of luxury recreational vehicles, is both these things – and perhaps their Caravisio concept is the best example in this sense.

The German company has been building luxury motorhomes under this name since 1996. In April 2010, when Apple finally debuted the iPad after years of speculation, Knaus Tabbert started thinking about how the technology would shape the future of caravaning in a context in which interest in the industry was nosediving. The idea of “technomad,” or what we call today the digital nomad, was relatively new, and so was the possibility of packing a camper or a trailer with tech to the point where the user could control every function from a single surface.

Caravisio took more than two years to bring this to reality, with more than 20 multi-disciplinary designers and industry experts attached to the project. It was introduced in 2013, with Knaus Tabbert spending the next couple of years showcasing it at caravan salons around Europe. It is, to this day, one of the most beautiful and sleek trailer concepts produced, even though the future it predicted never came to be down to a T.

To be clear, the company never planned to take Caravisio into production. Still, the showcase concept really did anticipate today’s trends, where most functions can be monitored or controlled online, maintenance and checkups run through an app, and modular layouts allow for turning a home on wheels into an office on wheels, with connectivity, outlets, chargers, and whatever else you need in order to do your job. Knaus Tabbert also included some of the features of the concept into future models, based on customer feedback.

So while the Caravisio never came to be exactly as it was imagined, it does deserve a spot in the unofficial hall of fame of iconic vehicles. Plus, with its gorgeous superyacht-inspired design, it is a true stunner.

Caravisio was a double-axle trailer measuring 9 meters (29.5 feet) in length and 2.5 meters (8.2 feet) in width. With a fiberglass body, it was light enough to be towed by an SUV, with a very aerodynamic silhouette featuring a sharp front end and expansive glazing. Inside, it featured a bedroom at the front end, a full-size bathroom, and a lounge that served whatever purpose was needed at a time: office, dining room, living room, kitchen. Additionally, it featured storage space and charging for a pair of electric bicycles at the rear and a hydraulically operated deck that completely opened the rear to the outside world.

Stylistically, the interior Caravisio was similar to what you would see even today on a superyacht but on a much smaller scale. The bedroom included two single-person beds in a V-shaped formation, which would be turned into a queen-size bed with a mattress extension. The bathroom was comparable to what you’d find in a proper motorhome, with dry toilet and sink, and a shower with smart water management system, with its own touchscreen for the controls.

The highlight of the lounge was the double glass door in the rear, which could be dimmed at a touch of a button and serve as a two-directional screen for a roof-mounted projector. This would allow the occupants to both watch content inside and screen it for other campground guests, should they desire it. The furniture here was adjustable to various purposes, and all appliances in the kitchen were electric.

Caravisio came with finger scanner locks, remotely controlled doors, fully adjustable suspension (it could be lowered all the way to the ground for loading heavy stuff), movable sunroofs, and the possibility to control the lights, heating and the entertainment system via an app. Even the temperature in the integrated wine cooler could be adjusted remotely.

While Knaus Tabbert never officially disclosed a price point for the Caravisio, which makes sense since they had no intention of bringing it to market, as the trailer made stops at various caravan shows in the following tears, the $800,000 figure popped up – and stuck. The recreational vehicle “of the future” lived up to the name in every aspect. 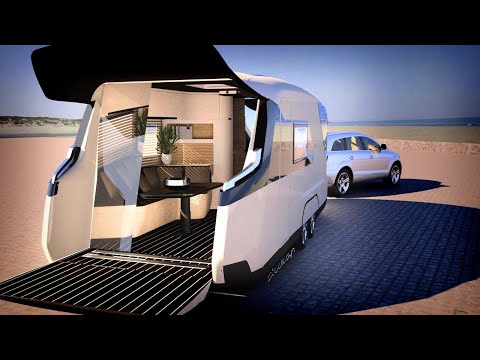