1 The ZUV Tricycle Is Quite Ugly, but It Still Puts Your e-Bike to Shame

2 Forget About Regular Cargo e-Bikes, the SunRider Is Fully Solar-Powered

4 MIMO C1 Is the World’s First Foldable Cargo e-Scooter, and It’s Affordable Too

We dream collectively of an autonomous future for passenger vehicles, trailer trucks, and aircraft. One company is also dreaming of autonomous e-bike trailers for cargo hauling within city limits, and it’s a dream that holds a sweet promise.

DroidDrive is a German company currently working on such a trailer. It’s called Trailerduck and, for the time being, it still needs a tow vehicle, even though it’s not technically towed by it. Trailerduck is self-propelled, but it still takes cues from the vehicle in front, which can be anything from an e-bike to an actual car.

However, for it to make sense and, most importantly, to make an actual impact in the crowded urban environment, it works best as an e-bike trailer. The best e-bike trailer, if you will.

These past couple of years have reshaped life in the city in ways few could have anticipated. The international health crisis has forced many to consider alternatives to public transport, while heightened environmental concerns further chipped away into private ownership of cars. Electric two-wheelers, whether bicycles, scooters, or motorbikes, have started to become more present in the urban scenario as alternatives to these two other popular means of transport.

Even cargo hauling is done these days by e-bikes, and there’s a separate, quite booming market for those. That said, whether you use an e-bike to carry groceries or your kids to school or as part of a larger fleet for a delivery service, you know that cargo e-bikes and e-bike trailers have their limitations. They’re mostly related to the maximum payload, overall maneuverability, and ease of use and can be real dealbreakers with some potential users.

They don’t apply to this funnily-named trailer, the Trailerduck (hat tip to New Atlas), a small, electric, automated logistics vehicle.

It’s made by DroidDrive and it’s a self-propelled, motorized trailer that attaches to your e-bike or trike, and boasts the biggest payload in the industry. Because the specially-designed drawbar with which it attaches to the bike is packed with sensors, it takes its cues from the towing vehicle and performs all maneuvers (braking, acceleration and maintaining speed, and turning) on its own. That literally means you’ll be riding like you have no trailer attached, though you will still have to take into account the extra length during operations.

Speaking of bragging rights, Trailerduck claims the world’s largest payload title, with a payload of up to 300 kg (661 pounds). The even better piece of news is that, while it can haul this much cargo, it’s still just 1 meter (3.3 feet) wide, which means it can travel on dedicated bike paths and even on the pavement without impeding traffic from other bikes and pedestrians. Moreover, because it’s electric and technically a part of the bike, it will be able to travel across all car-free city centers, where delivery vans are no longer allowed.

Versatile, lightweight and smart, Trailerduck is bound to become even better with further iterations, the same media outlet notes. DroidDrive is currently working on the towable trailer but, for future applications, it’s looking into the development of a Ducktrain system: a unit of up to five such trailers that will use LiDAR to wirelessly track and follow a vehicle. Not unlike a mother duck and its baby ducklings, the Ducktrain will ride on city streets, bike paths and pavements without any physical link between separate elements.

The German company is also hoping that, within three years, these trailers will be able to operate autonomously at least on certain predefined routes. Apparently, they’re “already physically ready to perform this function, and would simply require a software update.” This should hardly come as a surprise: in many cities across the globe, autonomous delivery robots are already in operation.

DroidDrive is taking pre-orders and accepting investors for the Trailerduck, with deliveries for the first units estimated for late 2022. No pricing per unit is mentioned, but New Atlas says renting one such trailer will also be an option, for a monthly fee of €499 ($587 at the current exchange rate). 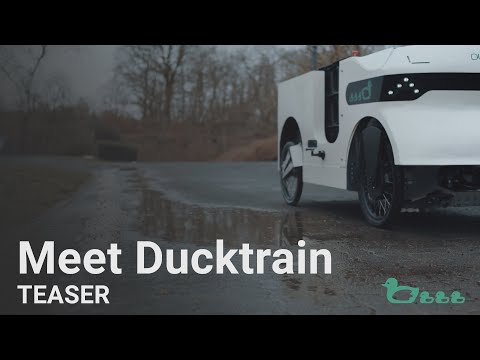