5 2021 Volkner Performance S Is a $7.7 Million Landyacht, With a Bugatti Hidden Away
Car video reviews:
Up Next

One of Jupiter’s Moons Has Long Term Water Vapors, but Only on One Side

For most people, a teardrop trailer can work just fine for short getaways, basic as it is. Heck, even a regular car will do when there’s no trailer or camper to be had, because, as the saying goes, beggars can’t be choosers. This obviously doesn’t apply to the one-percenters.

Featherlite Vantare Platinum Plus, the OG Most Expensive Landyacht in the World

The millionaires of the world wouldn’t be caught dead cramped in a regular trailer unless maybe if they were doing some sort of challenge or a return-to-the-basics kind of thing. Not that this is entirely damning behavior; any one of us would probably want to live large if we became rich overnight.

So what do millionaires do when they’re in the mood for traveling but not by private jet or superyacht?

On the already niche market of landyachts there is an even tinier niche of ultra-premium landyachts, and it is here that the Featherlite Vantare Platinum Plus fits in. These days, even us regular folks have grown slightly desensitized by this type of vehicle whose prices can range from $1 million to as much as $7.7 million if you want it fully custom, and with a Bugatti in the garage.

The Featherlite Vantare Platinum Plus did it before all of them, when ultra-premium landyachts weren’t even a thing, laying out the path for everyone else. It’s a 2006 build from Featherlite Vantare and it is the first landyacht to claim the title of the world’s most expensive, at $2.5 million (roughly $3.4 million in today’s money, adjusted for inflation). Said claim came from the maker itself, but was validated at the time by industry players and the media.

So what exactly was it that made this motorhome so notable and, above all, expensive? Unlike the recently introduced 2021 Volkner Performance S, it didn’t come bundled with a car, but it did have the stowable garage for whatever sportscar the owners wanted to take with them on their journey.

A triple-slide built on a Prevost chassis weighing 15 tons, it offered accommodation for just two people and the driver, with a grand master bedroom with bathroom and office, a separate lavatory, a lounge and dining room, and a chef’s kitchen. A second outdoor kitchen was also available. Karen B. Horton served as main designer on the entire project, turning the conversion into the realization of a millionaire’s wildest dream.

The Platinum Plus didn’t stand out for its ingenious layout or the fact that it included more features than other builds. It was high-tech alright (for that era), but its merit was in the premium finishes and materials used in the build. Imagine how a Russian mobster would furnish his monster RV, and you get a good approximation of the interior.

Jokes and unsavory comparisons aside, for that time, the Platinum Plus was the very definition of fancy. It represented the culmination of decades of experience for a company that started out building yachts (Vantare, before it joined forces with Featherlite), and was specifically created for the discriminating customer that wanted only the best. This meant Swarovski crystal chandeliers, onyx slabs in the shower, rare Inca marble, pearlized leather flown in from Italy, Sapele Pommele from Africa, Schonbek Crystal, and precious woods.

Enumerating all these doesn’t do justice to the actual build. The sofa in the living was a custom Italian piece, the dining table was made from a crystal that lit up from within, while the glasses were hand-blown signed crystal. The lavatory sink was a glass piece by Seattle artist Mark Ditzler, the bathroom one was also glass, by Seattle-based Roberto Scira, while the one in the kitchen was another one-of-a-kind work, hand-painted by Marzi Studios.

The kitchen was a chef’s unit, with a coffee machine and washing machine integrated into the cabinetry, hidden burner, and copper and granite surfaces. Every item in the motorhome, whether it was a larger piece of furniture like the leather-clad desk in the office or the crystal knobs in the bathroom, was either shipped in from overseas or made to order in the U.S., with the goal of creating the most luxurious and exclusive vehicle out there.

“The launching of the Featherlite Vantare Platinum Plus is a momentous event for us,” Featherlite Luxury Coach President and COO James Wooley said at the time. “This is the most expensive coach on the market today and is certainly without equal.”

That last part on how it is without equal still holds true today, one decade and a half later, when ultra-luxe landyachts are not as uncommon as they were back then. To wrap up, here’s a fragment of an episode from Discovery’s World’s Most Expensive Rides focusing on the Featherlite Vantare Platinum Plus, for a better appreciation of just how insane it was. It’s in Russian, which makes it hard to follow, but is actually suitable for the decadent interior shown. 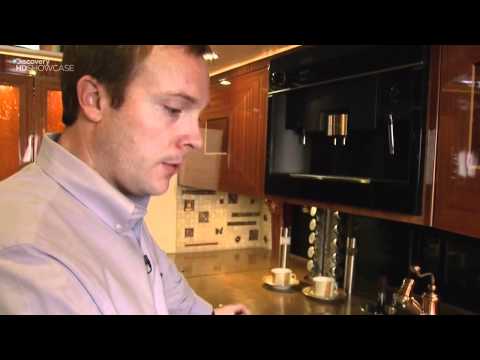