2 Ford Filmed Gymkhana 9 In VR, Expect To Experience It In Virtual Reality

3 Ken Block Made A New Gymkhana, And It's As Crazy As Ever

Ken Block Hands Over the Reins to Travis Pastrana for Gymkhana 11, We Get a Peek

The new Gymkhana 11 is coming out this month, and just by looking at the teaser, it might just be a real blockbuster, as Travis Pastrana jumps in the world's craziest, purpose-built Subaru Impreza WRX STI, packing a whopping 862 horsepower!
12 photos

Travis Pastrana has certainly got some big shoes to fill, as he takes over the reins from Ken Block for this edition of the Gymkhana. And in good old Gymkhana fashion, this one will mark the return to Subaru, where it all started more than a decade ago.

Back then, 530 horsepower was enough to do the trick, as Ken Block engaged in some of the most breathtaking driving stunts the world had ever seen in a non-Hollywood production, which hugely contributed to his popularity around the globe.

After continuously upping the ante across the past ten Gymkhana films, Ken Block produced some memorable videos, all while developing some amazing cars in the process. Pastrana's WRX STI is nowhere near as powerful as the Hoonicorn, but with 862 horsepower on tap it should be able to do the job just fine.

In this video we get a short preview of what's about to drop on December the 8th and boy oh boy is it hard to put into words what you're about to see. They've really put everything into this project, and the outcome might just be the most viral automotive video of the year.

144 mph (232 kph) speeds, cruising through his hometown with a police escort, four-wheel drifting with clouds and clouds of smoke coming out of the tires, insane rally stage like jumps, speeding under an upside-down flying plane, messing around with a fast bike, doing donuts alongside a BRZ and flying over a river.

And all that in just under a minute, as the rest of the video has Ron Zaras and John Naderi going over the inner workings of this rules-defying Subaru and also some of the history behind the Gymkhana Series. 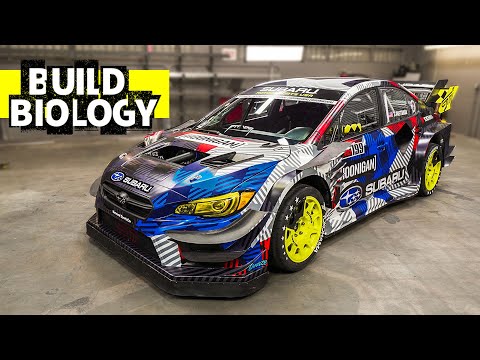