Subaru unveiled the 2022 Solterra in November 2021, and it showed the company's new direction towards electric vehicles.

Toyota and Subaru teamed up and made the bZ4X and the Solterra, respectively. This joint operation is not random since the two carmakers made the GT86 and the BRZ together. Also, worth mentioning that in 2021, Toyota raised its stakes in Subaru from 16.8% to 20%.

The Solterra (Sun-Earth in Latin) was a dynamic crossover, which still kept a traditional car design. Its angular front fascia showed a hexagonal-shaped grille covered by a panel where the Subaru badge took center stage. A slim, three-slat grille ensured the cooling for the battery pack and the vehicle's electronics on the lower side. A par of swept-back headlights with LEDs took the upper side. From its profile, a set of black plastic moldings covered the wheel arches, emphasizing the link to off-road vehicles. An unusual raked-forward tailgate in a Kamm-back design featured a roof-spoiler at the back, creating a dynamic effect.

Subaru provided the same displays for the instrument panel and the infotainment system as Toyota for the interior. Even though it wasn't necessary, the carmaker placed a tall center console that divided the driver from the side passenger. Thus, it made a personal space for the one behind the wheel. At the back, there was room for three adults on a split-folding bench.

While Toyota had a better experience in electric motors, Subaru knew better how to create an intelligent all-wheel-drive system. Even though there was no engine involved, it knew how much torque each axle needed to move the car in any situation in the most efficient way. Its expertise came in handy for the AWD versions. Still, the Solterra was available as a front-wheel-drive vehicle as well. 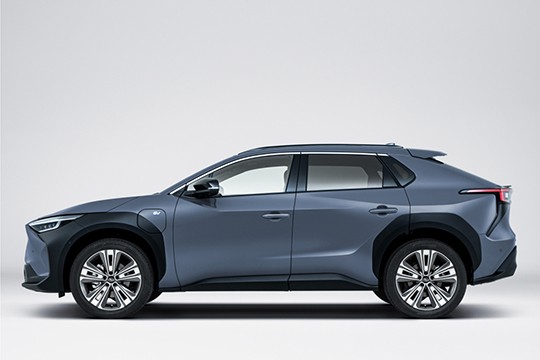