Subaru introduced the seventh generation of the Legacy in 2019 at the Chicago Auto Show and gave it a refresh three years later, in 2022, for the 2023 model year.

The Japanese carmaker was always known for its advanced all-wheel drive solutions and for how its cars behave on the road. But on the other hand, the design team hardly received any medals. Still, the cars were good enough, so people bought them regardless of their look.

For the 2023 model year, Subaru's design team worked a little bit more and enhanced the front fascia of the Legacy. It introduced a new set of LED headlights. Moreover, the grille was reshaped and became bolder. At the same time, the lower bumper received a set of wider side scoops than for the 2020 model year. For the Sport trim level, the carmaker added a lip spoiler on the trunk and 18" light-alloy wheels.

Inside, Subaru's most important upgrades on the car were made for the Subaru STARLINK infotainment system. While it kept the same portrait-mode 11.6", it provided wireless Apple CarPlay and Android Auto connectivity. Also, starting with the 2023 model year, the Legacy received improved safety systems, including automatic braking, blind-spot detection, and Automatic Emergency Steering.

Under the hood, the carmaker used the same 2.5-liter naturally aspirated engine and the turbocharged 2.4-liter as on the non-facelifted version. In addition, the CVT gearbox featured a manual mode that allowed the driver to change eight fixed gear ratios. 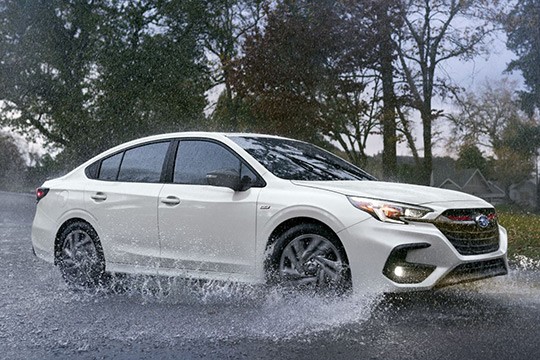