Not based on the fifth Subaru Impreza, which was unveiled at the 2016 New York Auto Show, but on the previous generation of the model, the WRX STI S209 is a limited edition model of the regular WRX.

The special model was revealed at the 2019 Detroit Auto Show and represents the first time that an S-Line version is available outside the Japanese home market.

Only 209 units will be produced exclusively for the American market, mainly to celebrate the success of the regular but aging WRX STI, which is about to be replaced by an all-new generation based on the Subaru Global Platform.

Befitting of the lineage created by previous S-Line limited edition models, the WRX STI S209 is the most powerful and best handling Impreza-based production car in history. STI engineers have updated the turbocharged, 2.5-liter Boxer engine to deliver no less than 341 horsepower, with the suspension, Brembo braking system and chassis being upgraded to massively improve cornering speeds, traction and response.

The 209 cars are only available in two exterior colors - the traditional World Rally Blue Pearl and Chrystal White Pearl - while the 19-inch BBS alloy wheels are exclusive to the S209 as well, as are the bespoke Dunlop SP Sport Maxx GT600A tires. 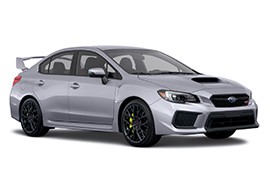