Subaru introduced the refreshed version of the Outback's sixth-generation at the 2022 New York International Auto Show and brought an improved look and enhanced safety features.

The Outback was one of the best crossovers on the market. This vehicle combined the utility of an SUV with the affordable running costs of a station wagon. Its only flaw was the lack of engine variety. However, those two powerplants were good enough for most people.

Subaru made the Outback in six trim levels. Apart from the Wilderness version, all the others featured an enhanced front fascia with a redesigned bumper. That provided a bolder grille and redesigned LED headlights. Moreover, the bumper featured black trims that offered a more aggressive, rugged look. These matched the wheel-arches moldings that protected the bodywork from mud and stone chips.

Depending on the trim level, the Outback featured a two-ton upholstery and seats covered in StarTex, a water-repellant material. From the safety point of view, Subaru installed standard EyeSight Driver Assist Technology on the entire range, with an enhanced system that operated smoother than on the previous version. In addition, this one offered a wide-angle camera that helped the driver, especially at crossroads. Last but not least, the Limited version featured an LCD rear-view camera mirror.

Under the hood, Subaru installed a turbocharged 2.4-liter flat-four and a 2.5-liter naturally-aspirated flat-four. Both were paired to a standard CVT that sent the power in all corners. The ground clearance for most of the versions was 8.7" (22 cm), while the Wilderness stood even higher, at 9.5" (24 cm). 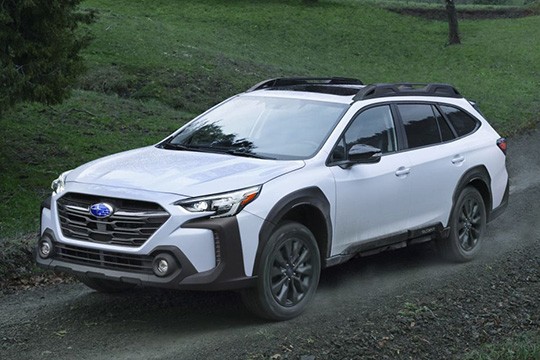