5 Striking Specter 1 Speed Pedelec Is Built Like a Supercar: Low in Weight and High on Tech
Car video reviews:
Coverstory

I want you to imagine a cargo e-bike capable of carrying you, your two children, something from the hardware store, and a few bags of groceries. Now put a price tag of just $1,600 on that EV, resulting in the KBO Ranger cargo e-bike.

KBO's Ranger E-Bike Is Like the Matryoshka Doll of Cargo Bicycles: Cheap as Peanuts Too

Folks, the name KBO Bike probably doesn't ring a bell. That's because they appear to be a relatively fresh team on the cycling scene. Still, with their eyes set on industry domination, their approach to supplying you with an e-bike may come off a tad uncanny because who in their right mind would offer up a beast like the Ranger e-bike for a mere fraction of what other cycles in this class can achieve.

That price initially attracted me to the Ranger, which could be the same for you. Nonetheless, I've decided to bring to light all other features so that you can understand what to expect from this machine in case you have some cash lying around the house.

First, you need to know that KBO is an e-bike manufacturer that already offers several EV fleet solutions based on the eternal bicycle. Well, all that knowledge is wrapped up in the Ranger, and that alone is good reason to pay attention; there's proven R&D in this bugger.

Since the Ranger is an EV, let's start with its electrical capabilities. Kicking things off will be a rear-mounted hub motor that's running under 750 watts of juice. While the top speed will depend on your local law, one main aspect of this motor is that it can carry all 400 pounds (181 kilograms) of the total payload capacity the Ranger displays. Clearly, this bike is all about that pulling power.

As for the juice supplying this motor, you'll be able to spot a battery pack mounted into the frame. This 840 Wh battery is rated for up to 900 complete charge cycles, and with that much charge, up to 60 miles (96.5 kilometers) is the peak range that Ranger offers. Again, this is in optimum settings, so expect less depending on road conditions, cargo, and rider weight. If you have another pack lying around, simply double your range by swapping it for the soon-to-be-empty one.

Sure, it has a big motor and a sizeable battery, but why? Well, I've mentioned several times before that this bugger is a cargo machine, and because of that, all the electronics are necessary.

But how much cargo can the Ranger carry? You already know how much weight it can take, but to add to that, you'll find an array of carriers, running boards, and other cargo racks that can be placed on top of existing carriers, a sort of cargo-hauling matryoshka.

Wondering what you can do with that much capacity? Just take a look in the gallery and/or that video below. If you don't have time for that, just finish this paragraph. You can take up to two kids to school during the week while carrying their backpacks and your briefcase in the front rack. Knowing you'll need to pick up groceries later, you've brought along your additional cargo supports for when you pick up the kids from school.

Remember, I started this article stating that you can carry your kids, some groceries, and even some materials from the hardware store, all at once, using just one EV. To me, it sounds like the e-bike is getting ready to replace the timeless car. I can start believing this notion with machines like the KBO Ranger. 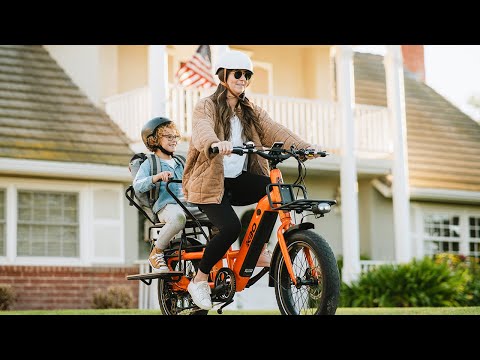 Editor's note: This article was not sponsored or supported by a third-party. Images in the gallery display an array of cargo rack options that are not standard for the Ranger.