1 Striking Specter 1 Speed Pedelec Is Built Like a Supercar: Low in Weight and High on Tech

2 Tern Unveils the NBD, Its Most Inclusive E-Bike Yet, Has an Ultra-Low Step-Through Design

This year’s Eurobike event already looks like a promising one, full of innovative and gorgeous appearances, and U.K.-based manufacturer Evari is one of the companies eager to turn some heads with its first titanium and carbon fiber wheeler.
9 photos

The Evari 856 is yet to hit the market but it was introduced last year and it’s already won a Eurobike award in the Start-Up category for its appealing design with the uniquely shaped monocoque carbon frame. One of the judges on the jury even stated that riding the e-bike is like driving a Porsche.

What strikes you at first glance with the Evari 856 is its clean, almost minimalist, but modern design, with TEI (total electronic integration). Its quick-release electric cables are all fully integrated and so are the lights and the two-piece cockpit, with the latter being designed and manufactured by Evari.

The e-bike boasts a titanium and carbon fiber construction. It is described as a leisure, tour, and commute bicycle. Every bolt on the wheeler is made using aerospace-grade titanium, which is also used for the drive system, namely the snubber and belt tensioner. The bike’s frame, fork, seat post, rims, handlebar, and stem are all made from carbon fiber.

The Evari 856 is available in two options: a single-speed version and one that features a Rohloff E14 speed hub, of which Evari boasts of being “practically service free, with legendary reliability”.

Both bikes weigh 17.8 kg (39 lb), are equipped with a Bosch Performance Line drive, and hit a top speed of 25 kph (15.5 mph) with the electric assist. Evari 856 is powered by a Bosch PowerTube 500 battery that claims to offer up to 70 km (43 miles) on a charge. The sleek e-bike features a Gates Carbon Drive, 29” wheels, and Magura MT4 hydraulic brakes.

If everything goes according to plan, Evari 856 should hit the market sometime this August. Interested buyers will be able to configure the bike and place an order after the Evari 856 makes its debut at the Eurobike event in Frankfurt, which is scheduled to take place between July 13 and July 17. We’ll probably get the pricing info just about then as well. 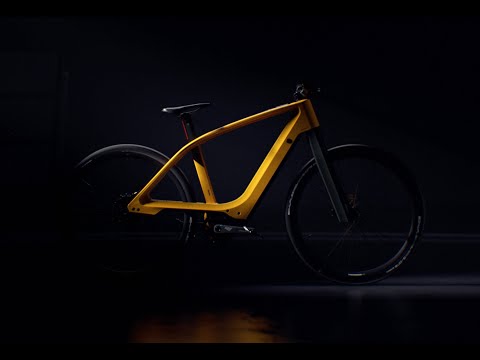