5 1,000 HP Plus BMW E30 Rips So Hard It Leaves All Kinds of Fluid at the Hoonigan Burnyard
Car video reviews:
Coverstory

Home > News > Auto Motorsport
7 Aug 2022, 14:20 UTC ·
by Razvan Calin
Minimal tuning for these two iconic sedans in what is arguably the most famous rivalry of the Old World's auto industry. A popular YouTuber team did precisely that (again): found a slightly modded BMW M240i and made a call to a friend who happened to own a closely matching specs RS3 of Audi's. Then got them both on a strip with a quarter mile of space between the start and finish lines and set them against each other.
6 photos

Right. Before we tell you that the German car was declared victorious, let’s meet the contenders.

The BMW M240i has a 183 ci (3-liter) straight-six under the hood. With the help of a JB4 Tuning Box, an Eventuri intake, and the CatBack Miltek OPF Delete exhaust, the Bimmer can rely on 450 HP to push its 3,730 lb (1,690 kg) body towards victory. Put two and two (wheels) together, and you come up with the all-wheel-drive power-to-weight ratio of 266 hp/ton.

The Audi is very closely matched in terms of power and drive train configuration: straight-five 152 ci (2.5-liter) outputs 460 HP to all four wheels. Lacking one cylinder but making up in horses, the green car (just a livery reminder) obtains a somewhat intimidating (for its counterpart) power-to-weight ratio of 292 BHP/ton. The RS3 is backed by the Development OEM+ PCM Tuning Box and Racing Line intake, alongside the Powerflex dogbone mount.

Despite the different maths under the hood, the two cars came in too close to call it off after just one go. Slower on paper, but with a more agile driver behind the wheel, the Audi got the two-out-of-three runs and seized the Better-From-a-Standstill trophy. Given the first round’s insignificant differences (primarily due to human sluggishness rather than a sheer mechanical advantage), a roll race naturally occurs in these situations. This only led to even more confusion since one of the runs resulted in a (near as makes no difference) perfect even.

Again, reaction time proved paramount, as the more consistent Audi driver made the most out of its machine and took the stage - and overall - victory. However, as both competitors agreed, the races did little to settle the dispute about which car was faster on the straights. So, we’re most likely right to expect the second round of Germanic archrivalry trials coming our way. 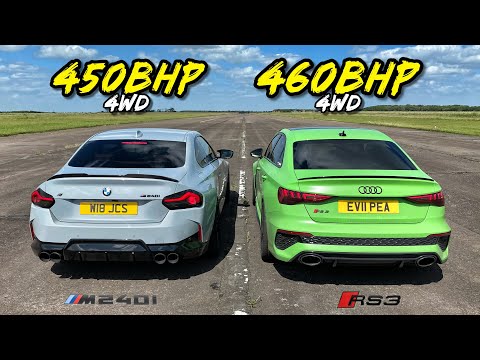