2 Facelifted Audi S3 Spied With Smaller Grille, Maybe BMW Can Learn a Thing or Two From It

3 Is a Second Facelift Enough To Keep the Audi Q7 Competitive for a Few More Years?

Audi unveiled in late 2022 its most powerful version to date, RS6, in the form of the performance version that provided more power and a specific styling.

While both its main competitors, BMW and Mercedes-AMG, offered sedan versions for the 5 Series and the E-Class, Audi focused exclusively on the station wagon shape. This, in Audi's terminology, was called Avant, and their idea was to provide a vehicle good enough for a family and powerful enough to please its driver.

In terms of aesthetics, the RS6 Avant performance featured some exterior parts finished in matte gray, such as the door mirrors, the front spoiler, the side scoops, the side sills, and the diffuser on the rear bumper. In addition, an option for carbon/black elements was available for the trims on the side windows. Last but not least, the four-ring Audi badge was offered either in black or chromed. The RS6 performance came fitted with standard 21" light-alloy wheels with an option for 22" alloys.

Inside, beside the gray and red Alcantara RS design packages, the automaker offered an option for blue. Moreover, on the steering wheel, the floor mats, and the center console, the automaker added blue accents. As expected, the front sports seats featured high-bolstered areas to keep their occupants in place during hard cornering. Yet, the rear bench profiled for two sported RS logos embroidered on the seatback, with contrast stitching.

But the most significant modification was under the skin, where the 4.0-liter powerplant received a power upgrade. In addition, the carmaker installed a new, lighter center differential that could transfer the torque between the front and rear wheels faster than the regular RS6 Avant. 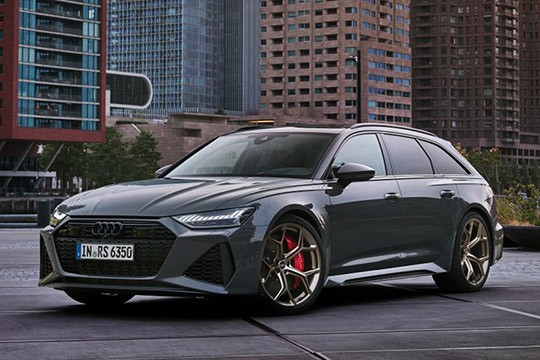