1 Meet the Patton, a Rugged RV That Combines Prowess With Comfort

Judith and Arthur are two friendly Swiss young adventurers looking to drive around the world. Obviously, this sort of feat can't be done in just any regular everyday normal automobile. So, they asked for the help of Yoda. "Travel the world, you must not." said the sage.

Before the couple could catch their breath, Yoda added, "without me coming along." Everyone, say hello to the Austrian Yoda of the army. (The Yoda advice quest is purely fictitious, but the characters and events depicted in this paragraph and throughout the rest of this story are real).

The two bought a 30-year-old Austrian Army Steyr truck and transformed it into a permanent residence in November last year. The Steyr 12M18 received a complete overhaul from the Germans of EXCAP. The 130 square feet (12 square meters) living quarters, tenderly christened "The Box," is the work of the Austrian company Krug Expedition. The Star Wars guru namesake comes from the army green livery of the vehicle at the time of its purchase by the globetrotters.

Now, being so wise, the Steyr army truck turned Star Wars RV has no interest in becoming a smart vehicle. So, no computers or any other fancy tech that can't be mended with a hammer and a good set of tools. To quote the traveling duo, the best quality of their mobile home is the "very simple mechanics that are easy to understand and – even more importantly – easy to repair. It can handle pretty much any Diesel quality this planet has to offer and doesn't need AdBlue." End of argument right here since you can't get any more off-grid self-reliability than the Fix-It-Yourself kind of vehicle (IF it breaks down!).

The living compartment is specifically laid out so that the sleeping space is separated from the rest. The queen-sized bed is larger than the dinette (which is just 80" x50"). The latter can also serve as a second bed "for the future children." (Planning ahead of time is a big plus when it comes to permanent RV living!). The clever space layout offers more than just comfort: should one of the occupants go to sleep, the other(s) can still do something else in the living area. Also, four guests can easily come over for dinner or a board game night.

Since we mentioned dinner, the kitchen has two induction plates and an electric oven, all using solar-powered batteries. The photovoltaic elements on the roof sum up to 1,150W to charge the 600Ah 24V Lithium cells. Additionally, the Steyr has an 80Ah generator that fills up the battery while driving. As for the ambient comfort, the efficient AC unit draws little power and can run straight on the solar panels (during sunny days, obviously).

Being a full-time hard-core camper, the Yoda Steyr has a pair of 53-gallon (200 liters) freshwater tanks and one 80-gallon (300-liter) grey water tank. The water supply covers half a month of daily usage, but it can be enough for three weeks, with a bit of rationing, in case of need. The dry separation toilet turned out to be the best solution. It requires no chemicals, lets out almost no smell, and can quickly be emptied (nearly) everywhere.

The truck has a rather unusual but convenient extra option: a Japanese motorbike. Small and agile, its primary purpose is getting riders around cramped and crowded cities. Firmly secured on the rear carrier, the lightweight Yamaha (just 310 lb, or 140 kg) has a small 7.6 ci (125 ccs) engine that is more than capable of short trips with no effort. Check the second video to see how the campers take it down from the back of the truck. The Steyr can move as the crow flies on any other type of road (or lack of said road even).

Judith and Arthur had planned a round-the-world road trip starting from the North American continent. The rest of the adventure included a ferry to Russia, a drive South into Mongolia, and then heading towards Europe via Kazakhstan and Georgia. The West-by-Far-East approach ran to a halt when the war hit Europe, so the Panamericana is the Swiss duo's goal for now. "But we'll see where the road takes us," adds the lovely team, since "Mongolia is still planned, by the way, but that will probably be another journey. We're just getting started." 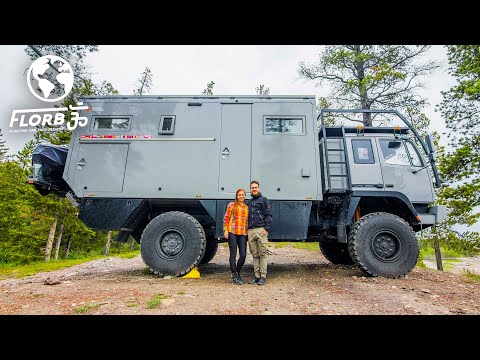