Whenever an S-letter preceded a nameplate on an Audi, customers knew there was something special about it, and the 2022 SQ8 e-tron was no different.

Audi unveiled the Q8 e-tron lineup in late 2022, replacing the former e-tron model that has been on the market since 2018. Yet, it was more than just a rename; it was a new era that defined the future of the German premium automaker. With the SQ8 e-tron version, Audi promised its customers that the performance part won't be left behind.

Sporting an aggressive stance, with a lowered bodywork than its regular Q8 e-tron sibling. Its front fascia featured the same LED signature light that emphasized the car's width. In addition, the 3D grille sported a stylized honeycomb pattern. The side scoops in the lower bumper showed the same four slats design as the DRLs from the lower side of the headlights. From its profile, the flared wheel arches, the 22" alloy wheels, and the side skirts created an even sportier look for the German crossover.

Inside, Audi used recycled materials for the seats and the Dynamica microfiber door cards, with an option for a leather-wrapped interior. Still, customers were delighted with the luxurious amenities offered by Audi, regardless of their choice. The instrument panel was a TFT display fronting the driver. At the same time, on the center stack, the carmaker added two touch-screens for the MMI infotainment system. The upper one boasted a 10.1" diagonal, while the lower one was of 8.6-inches. Like the regular Q8 e-tron, the SQ8 e-tron featured a 40/20/40 split-folding bench in the rear for three passengers. Apart from the rear trunk, the carmaker created a storage compartment under the hood, the so-called "frunk."

Unlike its regular Q8 e-tron siblings, the SQ8 version fitted with a three-motor setup: one at the front and two at the rear axle. These provided 370 kW (496 HP) fed by a 114 kWh battery pack. 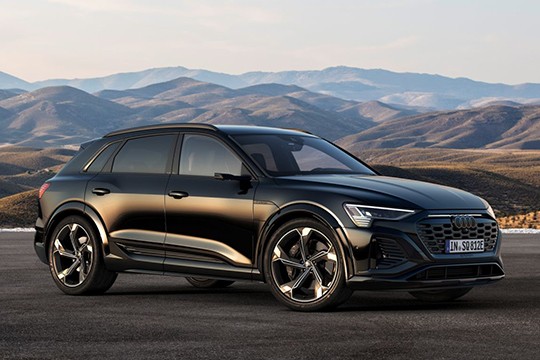