3 Seized Collection of Mostly Supras, BMWs Is Being Sold Off, 2 Years After Discovery

4 A Most Impressive Collection of Early Gadgets and Electrical Objects Discovered, Sold

5 Rare '92 Honda NR Appears at Auction With Low Mileage, Is Pricier Than a 2022 Shelby GT500
Coverstory

Elena Gorgan
How many impressive, historically-significant or first-ever feats can you pack under a single roof on four wheels? Apparently, a lot of them – and they’re all being offered for sale with this pristine 1965 Ford Mustang Convertible.
11 photos

This isn’t just a Mustang, though, if the phrase could ever be applied to a classic beauty like this one. This is one of the 11 Mustang Convertibles that Ford featured in the time-traveling tunnel in the Disney-designed Magic Skyway at the 1964-1965 New York World’s Fair, carrying thousands of passengers on a magic trip through the ages, from prehistoric times to a future that never came to be.

Shortly after the introduction of the Mustang Convertible, Ford partnered with Disney for the Magic Skyway, which would be featured in the Ford Motor Company Wonder Rotunda. Ford, Mercuries, and Lincolns were modified and set to tracks that ran along glass tunnels with dioramas and animatronic characters displaying the past and that moment’s vision of the future.

The Time Tunnel ran for two editions of the Fair, and included 12 convertibles for 1964 and 11 for 1965. The one that’s being offered through Mecum at the Indy 2022 event (now underway until May 21) is one of those 11 and one of just three surviving. It is also the only one to have been restored to Concours standards after a 5-year laborious and well-documented process that ended in 2015. It was bought nearly new and in original condition by the seller in 1979, and this marks the first time it’s been offered for sale since then.

As if all this isn’t enough to impress any potential buyer (and not just), Serial No. 5F08T383386 retains the original 200/120 hp 6-cylinder engine mated to the C4 Cruise-O-Matic automatic transmission, original sheet metal, and original glass. The interior has been restored to the original red, which makes a startling and awesome contrast to the Wimbledon White exterior paintjob. 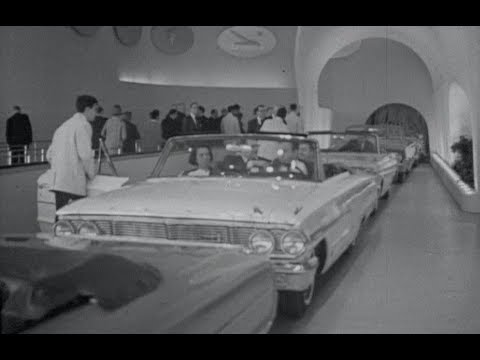