1 There Is a Time and a Place for That Special Vehicle in Your Life, Don't Miss It

Back in 1991, someone acquired a BMW M3 E30 Sport Evolution in the United Kingdom. Excellent choice, and figures show that only 50 other people did the same. Mind you, this was a limited-edition version of the BMW M3 E30, the one that started the M3 legend. Now, one of those 51 vehicles imported into the UK is for sale.
15 photos

Despite the fact that it was originally sold in the UK, the vehicle is a left-hand-drive configuration, while having its odometer in miles. If you are thinking like I am, it means that someone in the U.S. will be extremely happy to own it after adjusting the headlights to point correctly. Since new, it has only had two owners, and the second one has registered it for sale at auction.

As expected with a vehicle that is this hard to find today, it does have a full service history, as well as the appropriate documentation. Prospective buyers will be happy to learn that the car is accompanied by invoices, its original service book, and has been maintained by BMW main dealers, as well as the AC Schnitzer distributor in the UK. There are also no advisories on its MOT, and its MOT history confirms the low mileage.

At one point in its life, someone fitted a period-correct AC Schnitzer steering wheel, as well as a suspension system made by the same company for the M3 E30, but the original parts are also included in the price.

Furthermore, the fact that this vehicle is an original M3 E30 Sport Evolution is confirmed by official BMW correspondence, which also noted that only 51 such units were supplied new to the UK, and this is one of them.

The Brillant Red M3 has a cloth interior and a sunroof, and looks exactly as you would hope one to look. Its odometer reads 65,000 miles (ca. 104,607 km), which is not that much for a collectible car of this age, but it is not incredibly low either.

When compared to the regular E30 M3, the M3 Sport Evolution comes with a 10 mm (about 0.39 in) lower ground clearance, unique front and rear spoilers with adjustable extensions, wider front fenders, and grille slats with sealed gaps.

All the above were meant to have aerodynamic benefits on the competition vehicle, as this is a homologation special, but they have little to no effect on regular street driving.

If we consider its current mileage, its new owner might take it for the occasional drive, but the vehicle will probably spend most of the time in a heated garage, as it has for the past 30 years. Does that stop the owner from enjoying it? 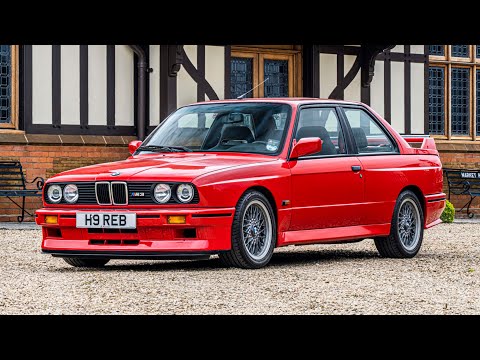