2 1969 VW Beetle Is a Distant RX-7 Relative, Should Not Be Underestimated

As the automotive industry is moving rapidly towards electrification, there is still a large group of stubborn people not willing to let go of the internal combustion engine. Japanese sports cars of the '80s and '90s seem to be more popular than ever before, and several influencers are riding the wave, further increasing their legendary status.
9 photos

If you'll think about the rotary community, Mike Whiddett and Rob Dahm are probably the most iconic promoters of the Mazda RX-7. While Mike is focused mostly on drifting, Rob has mainly been doing street stuff and the occasional drag racing. We've already seen a few Hot Wheels inspired by "Mad" Mike's cars, and it seems that his son's rotary-powered MX-5 is up next, too.

Even though Rob Dahm's 4-rotor Ahura project has amassed a cult following over the past few years, we've yet to see a diecast replica of that vehicle. Well, up until now, at least. Rob has been growing as an automotive influencer thanks to a constantly growing community of rotor heads around the world. His twin-rotor and triple-rotor RX-7s have been in the center of attention for years before the launch of the Ahura.

It was 6 years ago that he reported UPS losing his 4-rotor engine somewhere in Kentucky, and his car is still not ready to this day. At least not in the full sense of the word ready. We've seen the car going up against Ken Block's Hoonicorn last year. RX-7 enthusiasts around the world were holding on to the edge of their seats, hoping that Dahm would be triumphant. But the mighty Ahura needed more time to reach its final form.

Right now, Rob is aiming to go up to 2,000 horsepower, but some rotary experts in New Zealand seem to be doubtful he is going to achieve that target. But we'll just have to follow up on that in another story. Until then, let's get back to the topic at hand: a diecast tuner has built a replica of Dahm's RX-7! This isn't his first rodeo, as he has quite a few custom Hot Wheels cars to show off.

One of his early works was a Pandem widebody FD ,and he also designed a 3-rotor one about a year ago. Recently he built a TCP Magic RX-7, and that was probably his way of warming up for the Ahura. The base for the project is a Mazdaspeed RX-7 that was launched by Hot Wheels in 2020. Building the car up to spec required extensive work, including chopping the body, adding wide fenders, and even a hand-built 4-rotor engine.

He even went as far as mounting a custom pedal box, steering wheel, and bucket seats inside of the car! If you don't think that's crazy enough, he also installed a big front mount intercooler and oil coolers. If only Hot Wheels would build 1/64 scale diecast cars to such a level of detail! 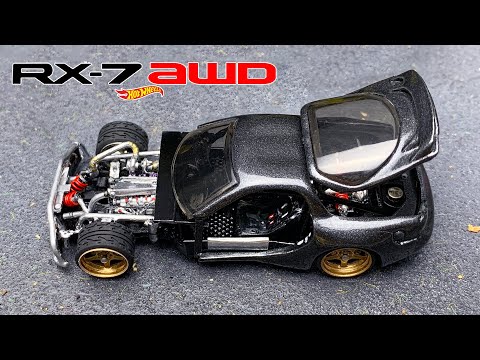