2 575 HP 1969 Pontiac GTO Sings a Scary Tune, Looking for Next Pair of Ears to Scream Into

3 Italian Artist Pays Homage to the Lamborghini Huracan EVO, Turns It Into a Minotaur

4 Corvette Z06 Tries Its Best to Beat the Nissan GT-R, but It’s All in Vain

They say you can't teach an old dog new tricks. But does that saying have any validity in the automotive industry? After all, you can slap a big turbo and a bunch of other upgrades to your old car, and it can be much faster than ever before. The question is, will tuning an older vehicle make it as capable as a newer one with the same power?
17 photos

I was recently talking to a professional motorcycle road racing rider that has been competing for almost 30 years now. He's got a room full of trophies, and he's still quite fast to this day. But he did acknowledge the fact that he has to train twice as hard to keep up with less-experienced but younger riders. And I guess this theory works for cars as well. Your '90s sports car might feel fast, but how does it stack up to newer cars?

And today's drag race is going to provide an answer to that question. That's because a 1992 Mazda RX-7 is stepping up to a Ferrari 458 Spider. Of course, the FD RX-7 has a series of upgrades, as the stock version would have been too underpowered for this challenge. Its 13B-REW engine has been street ported and is now running a Borg-Warner S363 single-turbo setup. An Apexi standalone ECU has been brought into play, and this rotary monster is now rated for about 540 horsepower.

The tricky part is that it's still running a standard, 5-speed manual gearbox. Also, the choice of tires is less than impressive considering the performance figures. I'm not saying Federal RSRs are bad for your car, but these are budget sport tires at best. At least it's slightly lighter than the Ferrari, at 2,866 lbs (1,300 kg). Even so, the RX-7 is facing a mountain of an obstacle.

The 458 Spider encompasses 20 years of technological advancements when compared to the FD. It has a naturally-aspirated, high-revving 4.5-liter V8 that's rated for about 580 horsepower. Just as the RX-7, it's an RWD car, but it has a state-of-the-art dual-clutch, 7-speed automatic transmission. Even though it's heavier at 3,020 lbs (1,370 kg), the drivetrain efficiency is bound to play a major role in today's race.

I've experienced both a 450-horsepower RX-7 and a Ferrari 458 Spider before. Even though I am a huge rotary fan, I don't think that this Liberty-Walk kitted 458 can lose the upcoming drag race. Things might have been different if the FD had a DCT gearbox or at least 100 more horsepower, but that's not the case for today. For the first test of this challenge, we're going to see a 0 to 60 mph (96 kph) comparison between the two cars.

The 458 Spider takes 3.61 seconds to get up to speed, while the RX-7 clocks in at 4.79 seconds. The individual quarter-mile (402 meters) test further reveals the difference between these two cars. The FD crosses the finish line in 13.14 seconds, which is not very impressive. The Ferrari only needs 11.75 seconds for this test, and at this point, there doesn't seem to be any hope in sight for the rotary Mazda.

For the standing quarter-mile race, the FD gets gapped on both occasions. I'm not sure whether the driver is trying to protect the drivetrain by not launching too hard or if he's just trying to avoid excessive wheelspin. Either way, this is not what you'd normally expect out of a 540-horsepower RX-7. Its only hope now lies in the rolling race. But the Ferrari is just so consistent with its runs, and at the end of the day, JDM fans are left utterly disappointed. 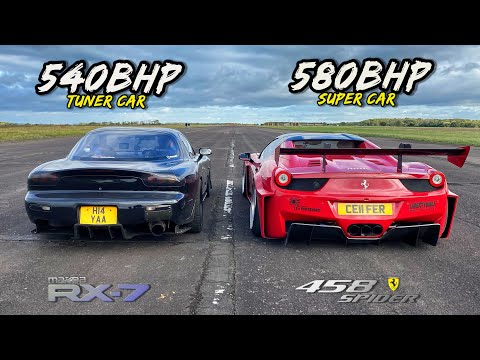