A new Hot Wheels case is out and should be available on shelves around the world soon. Most collectors are still at the point where they're looking for 2021 models, but others are already showing off their 2022 items. We've only just scratched the surface for what next year has to offer in terms of Mattel creations!
22 photos

People have been collecting Hot Wheels for over 50 years now! Do you think people at Mattel would have suspected how big the brand would become when they launched it? And there are no signs that things are going to slow down any time soon. Some collectors have recently gotten hold of the newest case for 2022. Be on the lookout for the Super Treasure Hunt model, which is the 1963 Studebaker Champ.

This diecast was first launched in 2011, and this is its 11th iteration so far! You might not be as excited about the Treasure Hunt model for this case, which is the Tooned Twin Mill. But I'm sure that there are plenty of collectors out there who value Fantasy Cars more than they do real-life replicas. As always, there are 72 cars in each case. Of course, not all of them are going to be brand new, but we'll take what we can get.

There's a new RX-7 for all your rotary fans out there! I'm getting close to owning 20 of these, with the second and third-generation ones included. This SA22C version of Mazda's rotary sports car was first launched in 2012, but we haven't seen a blue one for almost 5 years now! The Ford Mustang Mach-E 1400 is back again, with the same livery as last time. Here's to not losing hope that we'll get the SEMA livery later on!

The custom 2001 Acura Integra GSR is also back, this time sporting a British-Green kind of color which looks pretty cool, to say the least! Hot Wheels cases always have a diversified line-up and it comes as no surprise as this new one also has the U.S.S. Enterprise inside! Live long, and prosper! Judging by the success the Mercedes-Benz 500E has enjoyed so far, the new red version should be swept off the shelves faster than it takes for you to read this.

Any true JDM fan will probably add the Raijin Express to their collection right away, as this truck is reminiscent of the Japanese Dekotora custom trucks. This is the third time Mattel is offering this cast, but it's probably going to stick around for a few more years. They haven't changed the color for the Bugatti EB110 SS though, but yellow is still pretty good, at least until people will get bored of this version.

EV fanatics will rejoice at the sight of the Nissan Leaf Nismo RC, this time featured in red and black. Arguably, the first Metalflake Silver version looked slightly better. The Mud Studs series brings forth the Toyota Land Cruiser 80 and you can't help but appreciate the muddy wheels. The 2009 Ford F-150 now has Goodyear branding on its sides and it looks much nicer than previous generations. All in all, not the best case ever released, but that won't stop collectors from hunting it down! 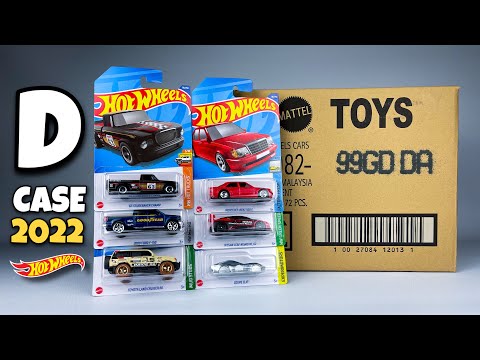