Mazda introduced a new model in its lineup at the 2021 LA Auto Show.

It wasn't a shrunk version of the larger CX-5 or an extended version of another model from its stable.

With the CX-50, the Japanese carmaker tried to get more attention and more market share, especially in the mid-size crossover segment. It was the first vehicle built by Mazda on the MTM (Mazda Toyota Manufacturing) plant from Huntsville, Alabama.

The car's design was more aggressive than on the CX-5, and its styling was closer to its smaller sibling, the CX-30. Its front fascia looked more rugged like it was ready to tackle some serious off-road trails, not just regular roads and parking lots. In addition, the carmaker added black, unpainted plastic moldings around the wheel arches. At the back, the taillights' design resembled the one from the 3 Hatchback version, with clear U-shaped lines for the parking lights. On the lower side of the bumper, Mazda installed an aluminum-looking plastic shield flanked by two exhausts.

Inside, Mazda made a surprising move by stepping up the game with an up-scaled design. Its clean, minimalist lines and materials offered a premium feel. Despite the general trend of replacing analog dials with full TFT displays, Mazda kept a mix of both, with a screen that looked like floating in the middle of the speedometer. The driver, or the side passenger, could have accessed the infotainment unit via a center-console mounted rotary knob. Since the car was slightly smaller than the CX-5, it featured five-seat options exclusively, with a split-folding bench in the rear. 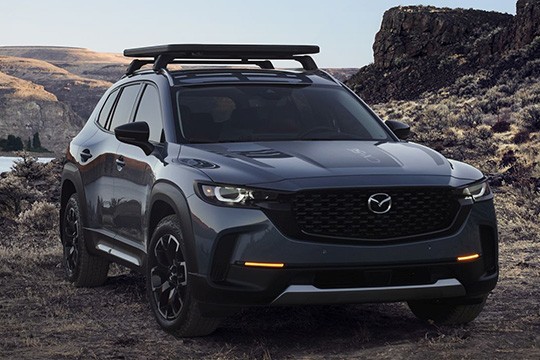